Tevva Motors, the UK-based electric commercial vehicle technology developer, has launched a new initiative that aims to greatly speed up the switch to electric vehicles in the CV sector.

The electrification of the passenger car market is already well underway, with 10% of new car sales in the UK being an electric or hybrid purchase, according to the latest SMMT statistics. Car OEMs are keen to pin their future on electric vehicles, and recent analysis shows that spending on new technology by the world’s top 20 OEMs hit £70 billion in 2018/2019, up from £55 billion in 2014/2015.

The expected surge in sales of EVs in the next three years is expected to require the UK’s first full-scale gigafactory in order for battery production to meet the demand. While much news surrounds the electric future of the passenger car, the same revolution is arriving at pace in the commercial vehicle world, bringing many of the same challenges with it.

Range anxiety, trepidation over the cost of switching from traditional diesel, and a wariness of the technology are all slowing EV technology’s progress in commercial vehicles. That’s not to say that electric CV technology doesn’t exist; far from it – Mercedes-Benz is among the most active of OEMs in this market, with versions of its Fuso eCanter 7.5t and 18t eActros trucks already being trialled by customers.

Meanwhile, electric trucks are in the pipeline from MAN, Volvo, Renault, DAF and Scania, and, of course, the likes of Tesla and Nikola. However, the timeline, ambition, and economics involved in all of these new products remain somewhat unclear, a fact that is undoubtedly hindering the swift adoption of EV technology within the sector.

Tevva Motors hopes to change the tide: since 2013, it has quietly been developing and producing patented technology that can be integrated into almost any OEM truck platform and chassis, to provide a full-electric solution. The firm’s core proprietary technologies comprise battery packs with a bespoke battery management system, drive system, and range extender (REX), as well as a state-of-the-art vehicle control and telematics system, which safely manages the vehicle and enables low running costs by optimising use of the battery and range extender.

Now, Tevva is taking up the cudgels to accelerate the adoption in the CV sector. At the 2019 Freight in the City Expo at Alexandra Palace, Tevva announced its ELECTRIFY advocacy programme, which enables logistics companies to commence the electrification of their fleets from as early as spring 2020.

Companies can lease a 12t medium duty truck fitted with Tevva’s package of EV innovations for a three or six-month period to evaluate the proven safety, reliability, and durability of the tech in a real-world trial environment.

The programme, which will soon have its first cohort of seven customers based between London and Oxford, is designed to expand the levels of awareness and understanding of the technology that is currently available among businesses in the UK and across Europe. The aim is not just to prove that the technology works – Tevva already has vehicles in service carrying its technologies with several companies, including logistics giants like UPS – but rather to demonstrate beyond reasonable doubt that the tech exists to displace diesel today.

David Thackray, Tevva Sales and Marketing Director, said, “When Tevva was founded in 2013, the question that businesses were asking was whether or not electric trucks could displace diesel in the commercial vehicle sector. The question today is ‘when’ they will displace diesel.

“The electrification of the commercial vehicle sector is now inevitable, and it’s now simply a question of how quickly it will happen. The answer is that it will happen sooner than most people think.

“The big players in the transport industry already see the benefits, opportunities, and potential of technology like ours, but too many businesses in the UK and across Europe still have a relatively low level of awareness. ELECTRIFY will enable a better understanding and increased adoption by proving beyond any possible doubt that logistics electrification technology is ready to displace diesel now.

“This is crucially important for the planet; the climate emergency is shockingly real, and it won’t wait for industry to catch up, which is why we are doing everything we can to move things on with the alacrity required.

“Over the next two years, we expect to be taking orders and deploying around 50 vehicles as part of the ELECTRIFY programme, starting in London and moving quickly to the Netherlands ahead of further European locations. Through 2020 and 2021, we will be able to generate many case studies that will prove that businesses can save up to 20% on TCO through an environmentally effective solution.” 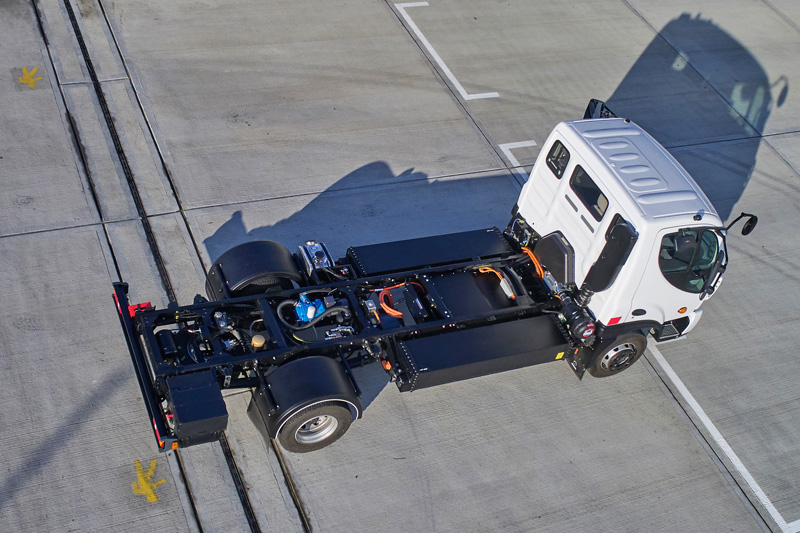 Under the scheme, the co-liveried truck is rented by the customer, running an unlimited mileage deployment with the vehicle over the period of the demonstration, during which Tevva will provide detailed telematics data to show all operational elements such as mileage completed, energy consumed, grid energy used, and range extender fuel consumption versus energy generated.

Tevva will also provide customers with all necessary training for their technicians and drivers in order to ensure safety during the trial, and optimise the benefits of the on- board technologies. With the shared learning and data generated by participation in the ELECTRIFY programme, businesses can not only help prove the real-world performance of the technology to the wider market, but also benefit from the option to retain the vehicle at the end of the trial period. They also receive priority ordering and build slots for any further vehicles that they wish to purchase.

ELECTRIFY constitutes the first trial of a true medium duty (12-t) EV truck. This is a significant and deliberate move on Tevva’s part, as it focuses solely on the medium duty (7.5t-14t) segment. The reasons for placing all current energies into this sector are simple; as the air quality debate gets ever more heated, and emissions regulations become more stringent, the most impacted are inner cities and urban environments, which are the areas in which the heaviest users of medium duty trucks do the majority of their business.

CEO Robin Mackie said, “There are always lots of exciting stuff going on in other areas, and there is no reason that what we are doing in terms of technology can’t eventually be scaled up and applied to larger trucks in the future. But, for the time being, there is enough opportunity in the medium duty sector for us to be profitable.”