CVW finds out the latest news from the Driver and Vehicle Standards Agency (DVSA) on the nationwide crackdown on HGV emissions cheat devices.

From 1st September 2018, the DVSA enforcement staff across Great Britain has been checking HGVs for emissions cheat devices. Cheat devices mean a vehicle can produce up to 20 times more dangerous emissions than those without such devices.

The national rollout of checks followed a successful year-long pilot. During the pilot, DVSA enforcement staff caught 449 emission cheats at five sites across the country. Of the 8,861 vehicles inspected from Great Britain and Northern Ireland, 299 emulators (3.44%) were discovered, and of 12,125 overseas vehicles, 150 emulators (1.24%) were found. Staff taking part in the pilot also continued to search for other mechanical faults and traffic offences as part of their normal enforcement activities. Added to this, DVSA staff found a further 32 emulators as a result of other inspections during the pilot period.

Within the first two and a half months (1st September 2018 to 17th December 2018) of the national rollout of roadside checks, 62 AdBlue emulators were found, so the problem is still very much a cause for concern. Gareth Llewellyn, DVSA Chief Executive, said, “The DVSA’s priority is protecting the public from unsafe drivers and vehicles. A vehicle doesn’t have to be falling apart to be unsafe – any driver or operator who uses cheat devices to get around emissions rules is putting the health of the entire nation at risk. The DVSA will take the strongest possible action against anyone who tries to cheat emissions rules.”

Poor air quality is the largest environmental risk to public health in the UK. It’s known to have more severe effects on vulnerable groups, for example, the elderly, children, and people already suffering from pre- existing lung and heart conditions. Here are just some of the conditions caused or made worse by air pollution:

Penalties for using a cheat device

Drivers caught with an emissions cheat device or a faulty emissions control system have 10 days to remove the device and repair their emissions system. If they continue to use a device or fail to repair the system, they can be fined £300 and have their vehicle taken off the road. 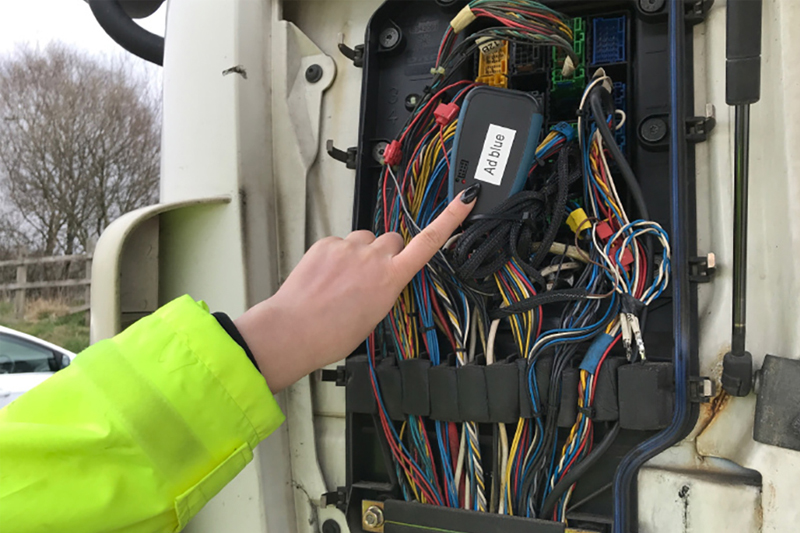 The DVSA will then carry out a follow- up investigation with the operator. After this, the agency can refer its findings to the Traffic Commissioners for Great Britain, who have the power to strip a company of its licence to operate. Unfortunately, cheat devices are just one of the ways used to cut corners and reduce the cost of operating at the expense of emission output levels. Below is a selection of alternatives that some businesses have been caught doing:

Dave Wood, DVSA Enforcement Policy Manager, concluded, “After strategic locations were carefully chosen for an AdBlue enforcement trial, a hugely successful pilot took around 500 AdBlue emulators off the road. Following this success, the scheme was rolled out across the country. We are now finding fewer emulators, which is partly due to this operation removing them, and partly due to operators heeding the warning that AdBlue emulators are not acceptable.

“The DVSA will continue to target those who put the nation’s health at risk by cheating their emissions.”

You can report a driver or vehicle operator if you suspect they’re using an emissions cheat device by contacting the DVSA customer service centre via this email address: enquiries@dvsa.gov.uk
Tags:DVSA