DVSA carried out almost 200,000 roadside checks and vehicle inspections last year. Yet, many HGV drivers and operators have misunderstandings about what the organisation does. Mark Horton comments: “I heard all the myths connected to our roadside enforcement work when I was a frontline officer. Now, I’m in a management role, and I often hear the same untruths at seminars and conferences.”

So, here are the most common myths surrounding DVSA enforcement work and the reality behind them:

This is a common confusion, but the truth is DVSA’s enforcement focus is on commercial vehicles as set out by law. The Police are responsible for roadside enforcement of cars. The reason for this is clear.

Commercial vehicles – whether they’re lorries, vans, or large passenger vehicles – pose a higher risk to road users. Often, their sheer size means the impact of something going wrong is huge and is potentially even worse when you’re talking about a coach with 70 passengers on board.

Unlike the average car driver with a short daily commute, commercial drivers are on the road for long hours, so the risks are much higher. DVSA’s role is to make sure commercial drivers are taking breaks and not driving for too long to keep us all safe. DVSA has dealt with over 21,000 serious drivers’ hours offences since last April.

The Government also requires DVSA to check other road users, such as vehicles towing trailers and caravans, as part of wider road safety initiatives. However, DVSA works with the Police in joint-enforcement operations targeting all vehicles, and DVSA covers cars with its statutory work on MOTs. 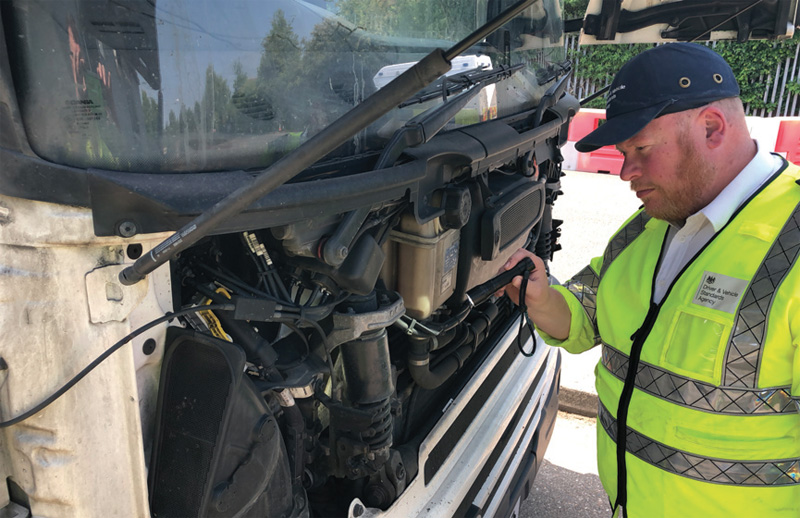 2. ‘DVSA pulls over all lorries’

The enforcement is focused on the seriously non-compliant operators to improve safety and traffic flows. DVSA is very unlikely to stop vehicles run by the safest operators – belonging to DVSA’s Earned Recognition (ER) scheme – unless there is an obvious visual problem. This is an extra incentive to encourage operators to keep their vehicles in good order and follow the rules.

The organisation’s enforcement officers check how compliant an operator is at the touch of a button. Their compliance ratings are based on previous roadside checks along with other intelligence, such as annual test results of their vehicles.

3. DVSA keeps the money from its roadside fines’

All of the money from the fixed penalty fines goes to the Government to fund vital public services. The only exception is the £80 fee DVSA charge to free up an immobilised vehicle once a serious defect or offence has been resolved, which partially covers the cost of the action.

A large part of its enforcement funding comes from other DVSA income, such as lorry and large passenger vehicle testing fees.

Above all, DVSA fines aim to deter commercial drivers and operators from breaking the rules and not maintaining their vehicles. Other deterrents include prosecutions and referring more serious offences to the Traffic Commissioner.

4. ‘Human error causes most accidents, why bother with vehicle defects?’

It is true that defective vehicles account for around 2% of all road accidents, and the UK has some of the safest roads in the world. However, this is partly testament to DVSA’s enforcement role dealing with vehicle defects along with car MOTs and annual tests for larger vehicles.

This myth also ignores DVSA’s work on distractions, such as mobile phone use and drivers’ hours, which help to reduce accidents caused by human error.

5. ‘DVSA gives out huge fines on any defect or offence’

It is all about the level of risk, so the fine or other punishment is in line with the severity of the defect or offence. Just like a car MOT, DVSA gives out advisory notices on minor defects which need looking at but aren’t serious safety risks, and these do not involve a fine.

Whilst some drivers feel a faulty indicator bulb is not a major issue, DVSA ensures the bulb is replaced before allowing the vehicle to move on to prevent an accident. DVSA only hands out a fine if the driver was aware of the defect and carried on with the journey. It’s estimated 85% of defects can be spotted by the commercial driver during their required walk-around check before each journey.

The clue is in the title – our role covers drivers and vehicles, not the roads themselves.

Councils are responsible for maintaining local roads, whilst Highways England and Traffic Scotland cover the maintenance of motorways and major trunk roads in England and Scotland. However, DVSA is part of the bigger road condition ‘picture’ as it tackles overloaded lorries and insecure loads, which can cause significant damage to the network.

What are the benefits of joining the ER scheme?

DVSA set up ER so it knew which operators could be left alone to run their business, allowing it to focus on the seriously and serially non-compliant. The scheme is free to join, with no fees payable to DVSA. One operator has seen savings of £13,480 since joining the scheme.

However, ER has many other benefits for operators, including:

Phil Breen, DVSA’s National Account Manager for its ER scheme, will be on Stand 4G115 at the CV Show to answer any further questions you may have.

To find out more on becoming and ER Operator and how it works, click here.
Tags:ComplianceDVSA