In an emergency, every centimetre counts when braking. The quality of all brake parts installed on the vehicle is, therefore, extremely important. febi explains how it puts its brake discs to the ultimate endurance test.

On a commercial vehicle test track, febi Truck brake discs (12731) were installed on Team Schwabentruck’s race truck – a team which is sponsored by febi bilstein. With 1,150 hp and 5,000 Nm of torque, the brake discs fitted to this 5.5- tonne racing machine were pushed to the limits of their load capacity – and were heated to nearly 900°C at their peak. 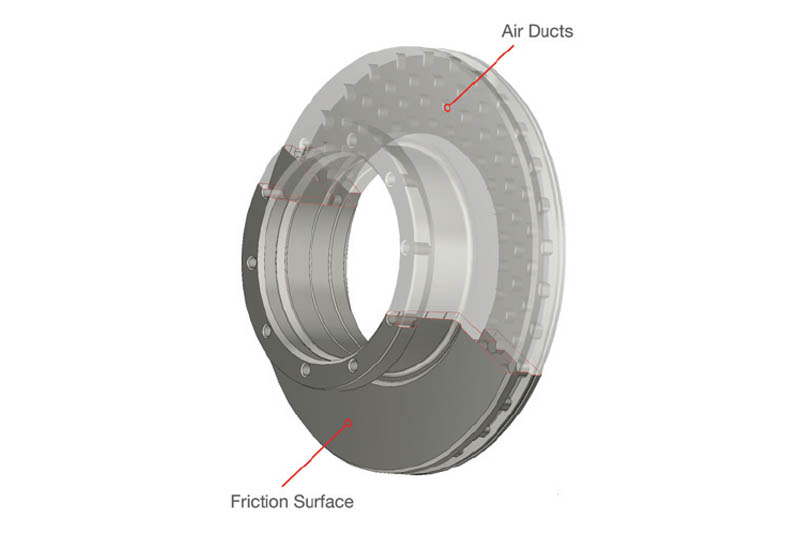 During heavy and repeated braking manoeuvres, the temperature of the brake disc is the critical variable. This is because, during braking, the kinetic energy of the vehicle is converted into thermal energy through friction. If the brake disc becomes too hot, cracks can form, and, in extreme cases, it can break.

To keep the brake discs at a tolerable temperature level, they are normally water-cooled during racing. Water is sprayed through nozzles from the hub side into the internal ventilation ducts as required. However, during the load test, this water cooling process was disabled.

For the test, a new brake disc, which had been used in races up until then, was mounted on the left front wheel and the febi brake disc (12731) was mounted on the right front wheel. During the test, the temperatures of the brake discs were measured with infrared sensors and recorded with telemetry software. The recorded data is displayed in Fig. 1. The braking processes can be recognised as vertical deflections. Maximum temperatures of 890°C were measured.

Throughout the entire test, the febi brake disc remained 40°C cooler on average than the racing brake disc. Even at the maximum thermal load of 890°C for the racing brake disc, the febi brake disc measured in at a temperature of only 735°C. This temperature difference of 155°C is of enormous importance for the high loads of a truck race and can be the difference between victory and defeat. If a brake disc fractures during the race, a pit stop is inevitable, and the chance of one of the front places is lost.

That is why, ever since this test, the truck racing professionals Steffi Halm and Gerd Körber have been confident that they can rely on febi‘s standard brake disc, which has proven itself under even the most challenging racing conditions.

Three factors are responsible for the load capacity of a brake disc: the material, the material thickness, and the design of the internal ventilation. The material that is generally used is cast iron with lamellar graphite (Fig. 2). Carbon, as well as silicon and other components such as manganese, chromium, and nickel, are also responsible for certain properties. Depending on the composition, elongation/ductility and tensile strength/hardness differ significantly.

The design of the internal ventilation pillars has a significant influence on the cooling of the brake disc. The maximum possible surface area improves heat dissipation. However, they also absorb compressive forces as soon as the brake pads grip. If the pillars are too small or improperly arranged, stresses and cracks can quickly form.

The excellent temperature behaviour of the febi brake disc can be attributed to the special material and design. The thickness of the friction rings, together with the optimal design of the cooling channels, allows for high operating temperatures without the formation of cracks.

In racing conditions, this provides a longer service life and greater reliability. The febi brake disc has been fulfilling the expectations at every race weekend for several years now and has played a role in the success of Team Schwabentruck.

Although febi brake discs are made for the road, they are also effective on the race track. Or as Team Schwabentruck driver Steffi Halm says: “What works here, works 50 times for the road!”

To see the entire braking range from febi for yourself, click here.
Tags:Brakesfebi bilstein