It is well recognised that brake friction components are critical to vehicle safety.With heavy demands on performance, these components need to be robust and to work efficiently and effectively in all operating environments, temperatures, pressures, and speeds. This is in addition to satisfying legal requirements for safe braking at the specified test speeds and pressures.

The worst feeling any driver can have is when the brakes fail to work effectively; this can be due to brake fade. Brake fade occurs when the friction material becomes too hot and the friction level between pad and disc reduces markedly causing the brake stopping power to reduce significantly.

Brakes work by converting kinetic energy (the motion of your vehicle) into heat so that your vehicle can safely come to a stop. This means that it is completely natural for brakes to get hot in order to stop your vehicle. However, this heat can be dissipated and its negative effects minimised by cooling the discs down as quickly as possible. 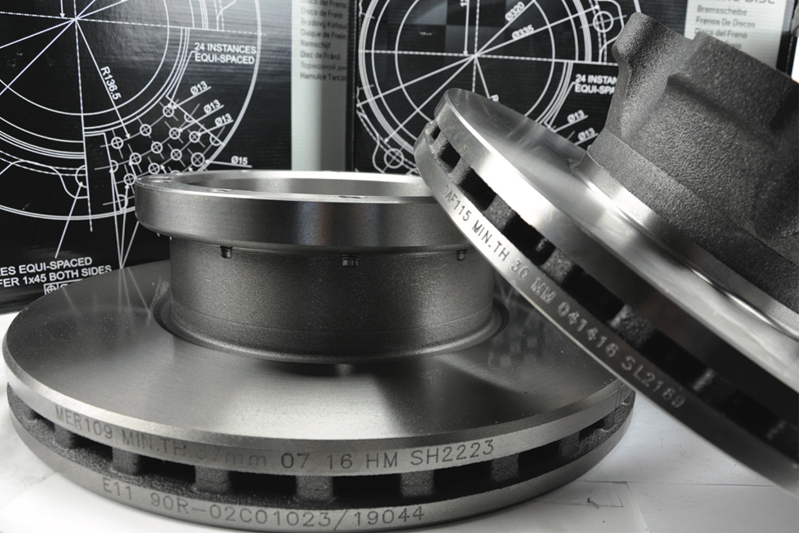 The overwhelming majority of heavy vehicles fit vented brake discs as OE. Without doubt, solid discs have their place – off road and quarry applications, for example, where mud, sludge etc. can fill the vents, reducing their effectiveness. However, for on road applications, vented discs are generally a superior choice; they cool up to 40% faster than solid discs so other wheel end components – such as rubber seals, tyres, and bearings – in the vicinity of the brake are exposed to high temperatures for less time providing longer life and better safety. Also, the friction material is not overwhelmed with heat that it cannot handle.

Because of its larger mass, a solid disc has a bigger heat sink. So, on a single brake stop, the temperature rise during braking will be less with a solid disc than a vented disc, but this advantage is not maintained when repeated brake stops are carried out. This is because vented discs cool significantly quicker than solid discs; therefore, with repeated stops, a vented brake will be less prone to brake fade.

Because of their mass, solid discs may be less prone to distortion when hot, but generally this is not an issue with properly designed vented rotors, especially those designed to prevent coning. Thermal ‘hot spotting’ and crazing and cracking is more to do with the composition of the cast iron and the choice of friction material and how well it conforms with the disc to ensure uniform pad/disc contact.

There are other reasons why vehicle manufacturers use vented discs on most applications. These discs weigh less than an equivalent solid disc, typically by 7kg, which amounts to 14kg per axle. Extra weight reduces vehicle payload carrying capacity and increases fuel consumption and, because of their extra mass, solid discs are also much more expensive than the equivalent vented rotor by at least 30%.