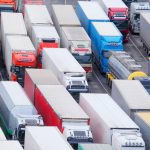 Lorry drivers and operators who try to cheat vehicle emissions could be taken off Britain’s roads in a major government crackdown.

New roadside checks, which start in August, will target those who try to cheat the law, helping to improve air quality in towns and cities.

The Driver and Vehicle Standards Agency (DVSA) is taking tough action after the government consulted on a draft plan to improve air quality across the UK.

Councils are responsible for improving their area’s air quality – but under the government’s plan they will be expected to develop new solutions to reduce emissions quickly, while avoiding undue impact on the motorist.

The crackdown follows emerging evidence, including from DVSA enforcement staff, that unscrupulous drivers and operators are using cheat devices to cut the cost of operating.

Transport Minister, Jesse Norman, said, “I welcome this crackdown on rogue hauliers who cheat the system by installing bogus devices which lead to increased pollution. There has rightly been a huge public outcry against car manufacturers that have been cheating emissions standards, and the same rule should apply here too.

“We all need clean air in which to live and work. That’s why the Government has committed more than £2 billion since 2011 to support greener transport.”

“DVSA’s priority is to protect you from unsafe drivers and vehicles. We are committed to taking dangerous vehicles off Britain’s roads and this new initiative to target emissions fraud is a key part of that.

“Anyone who flouts the law is putting other road users, and the quality of our air, at risk. We won’t hesitate to take these drivers, operators and vehicles off our roads.”

DVSA will force the driver and operator to have the emissions system fixed within 10 days. Failure to comply risks a fine and immediate immobilisation. For repeat or more serious incidents of emissions fraud or tampering, the DVSA will take the vehicle off the road immediately, in addition to levying a fine.

The agency will also investigate any GB operators caught cheating emissions and pass its findings to the Traffic Commissioners, who are responsible for the licensing and regulation of those who operate heavy goods vehicles and have the power to remove operator licences.

DVSA will continue to work with its counterpart agencies across Europe, and further afield, to make sure that all offences committed by non-GB hauliers are dealt with locally.