Lee Sharp of Pico Diagnostics explains how the PicoScope can be used on trucks to improve the accuracy and speed of a fuel pressure fault diagnosis.

The truck in question is a 2016 Volvo FMX Tipper with the D11k engine. The vehicle continually entered limp mode and displayed an engine system failure warning on the dash. It came to me after the owner had spent thousands of pounds over the last two months with another workshop. They had been changing different parts to try to get to the bottom of the fault. The truck’s owner was a new customer for me and he contacted me based on a recommendation by one of my current customers, so the pressure was on to get it right the first time. 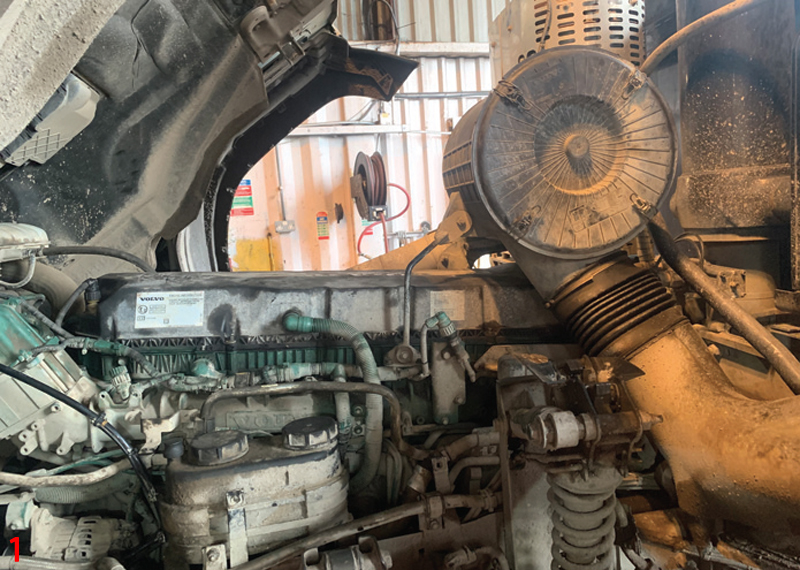 When the truck arrived, I did a quick check and the engine fault message was on. A scan of the engine revealed two codes, both current, which were P228F00 and P009400, both of which relate to fuel pressure. The first one means the fuel pressure regulator has reached its limit in trying to control rail pressure, and the second is saying there is a fuel leak. The ECU determines a leak by monitoring the rail pressure at engine shut down and, although I have yet to see it written down, I believe 40 seconds or more is regarded as acceptable for fuel pressure decay on shutdown.

Due to the ECM not giving a data PID for rail pressure – even in the dealer tool – the only realistic way to monitor the pressure is with a scope. As the rail is mounted under the cam cover with the injectors, I back probe the harness where it enters the cylinder head (circled in Fig. 3). 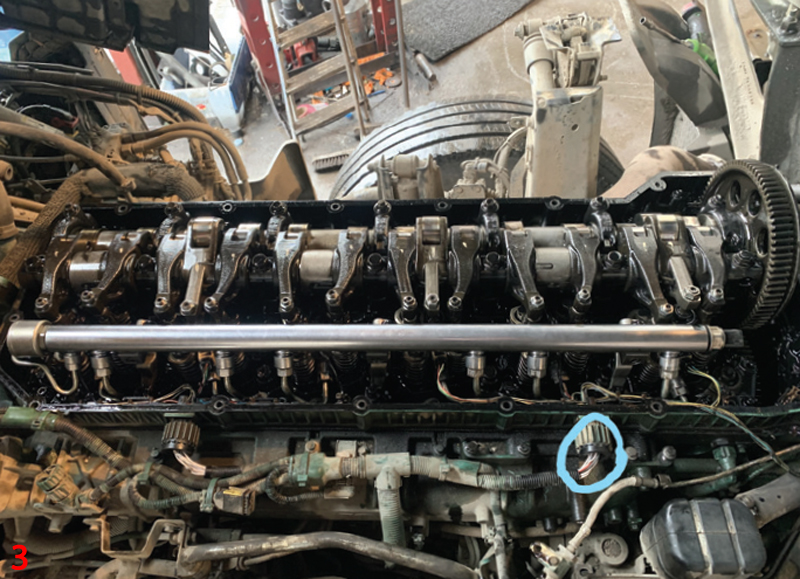 I take a base reading with a start, idle, and then shut-down to confirm that the decay time is excessive. Then, I set about removing the airbox with its frame and the cam cover to get access. In this case, the decay time was less than four seconds, which is by far the worst I have ever seen. To make sure the sensor could still read, I had to switch the ignition off and wait for the engine to fully stop before switching the ignition back on again.

Once I had access, I could get a sense of the fuel system fitted. On the rail, we had the pressure sensor at the rear and the ECU-controlled pressure regulator (ePRV) at the front. The six injectors are made up of two different types of cylinders. 1, 3 and 5 have standard solenoid injectors, and 2, 4 and 6 are pump unit injectors that supply the rail. The return is via a common galley that runs through the head. 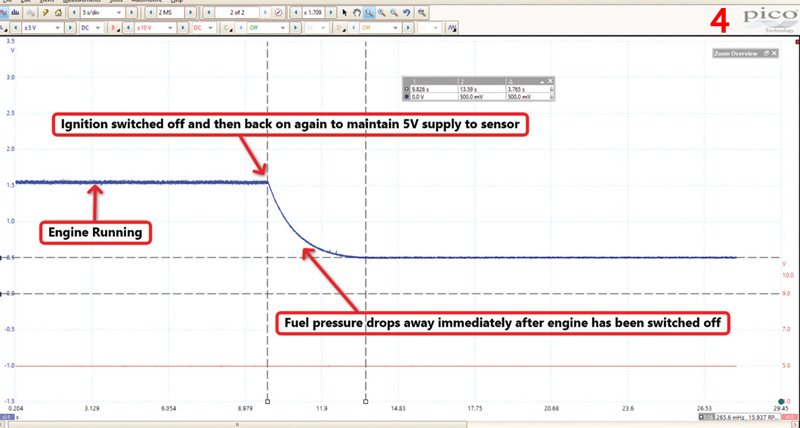 My next step was to disconnect the injectors one at a time, cap the rail, and redo the decay test each time. Once a bad injector is disconnected from the rail, the decay time should improve. After checking them all, you can establish which ones are leaking back the most. Aside from the cap on the rail, a pipe is connected to the injector. This is to pump the fuel into a container to stop the sump being filled with fuel. It’s helpful to compare the flow rate from each pump unit.

After checking all six units, it would normally be obvious from the results which injectors are responsible for the fast decay time. However, in this case, the decay remained the same regardless of which injectors were disconnected. Fig. 5 only shows the result with injector number 1 disconnected, as all the captures were pretty much identical. 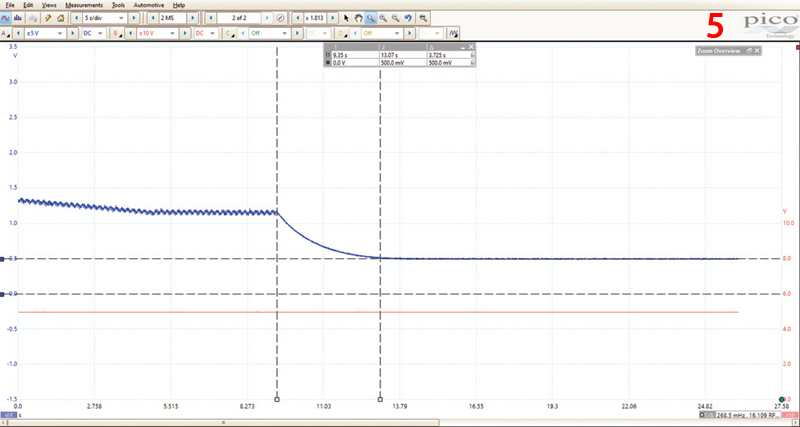 Next, it was time to establish what else could be leaking high-pressure fuel from the rail. Apart from a physical leak from the rail or pipework, which were all okay, the only other culprit could be the ePRV. This would normally have been checked before the injectors, but since this was one of the parts that had already been replaced, I decided to leave it until last. I checked it by capping the cylinder head where the pipe from the ePRV enters the return passage and fitting a larger bore-reinforced long hose to the pipe and routing it to a container. I did this to reduce the pressure in case anything did escape from the ePRV. It didn’t shed a drop – even at ignition off – yet the decay time was still around four seconds (as shown in Fig. 6). 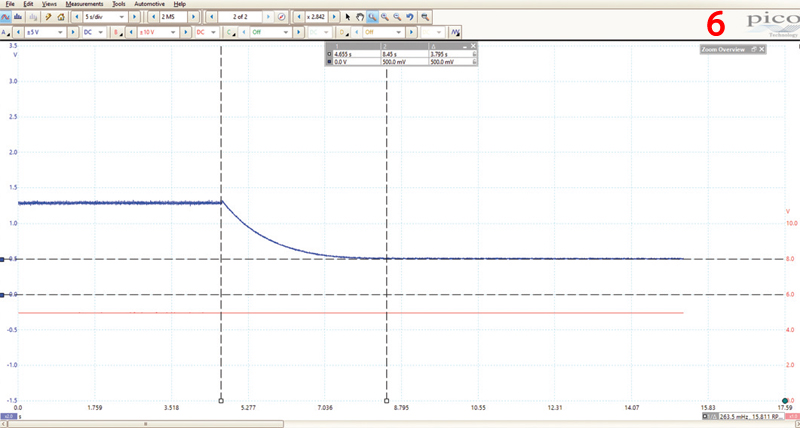 Even though I have done this kind of job quite a few times now, this is the first time I have been unable to improve the decay time during the tests. This did confuse me a little at first, as I was thinking that, even if all six injectors were indeed the cause, then surely disconnecting any one of them would have a positive effect on my test. At this point, I decided to step away and get on with some other jobs that were waiting whilst thinking about what could be causing this issue. With all the results saved, I could always go back and review it later.

As it turned out, one of the other jobs was a similar truck that turned out to have a broken CAN wire. I used the PicoScope to track it down, but it meant I didn’t get back to the fuel issue that day. It wasn’t until I got home that I realised I had the answer in front of me. It could only be all six injectors because there was no other way for the pressure to escape the rail, and the consistency of the waveform confirmed the rail pressure sensor was good. 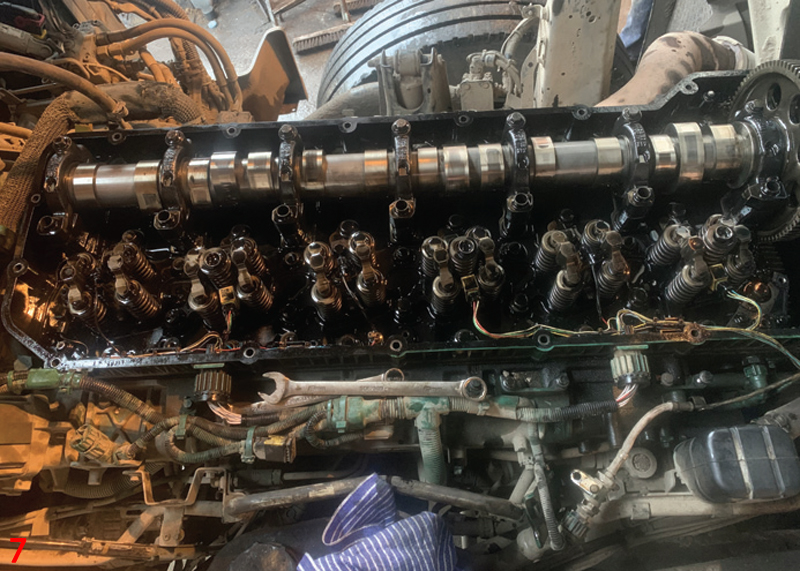 The only reason I could think of to explain why isolating the injectors didn’t improve things was that the galley in the cylinder head was backing up with all the fuel leaking off. Disconnecting only one injector at a time wasn’t enough. As soon as I got in to work, I ordered all six injectors at a cost of over £2,000 and set about removing the old ones.

Once everything was back together, and the trim codes and adaptions had been reset, a quick check showed that the fuel pressure was still holding after 40 seconds and, in other captures, over three minutes! 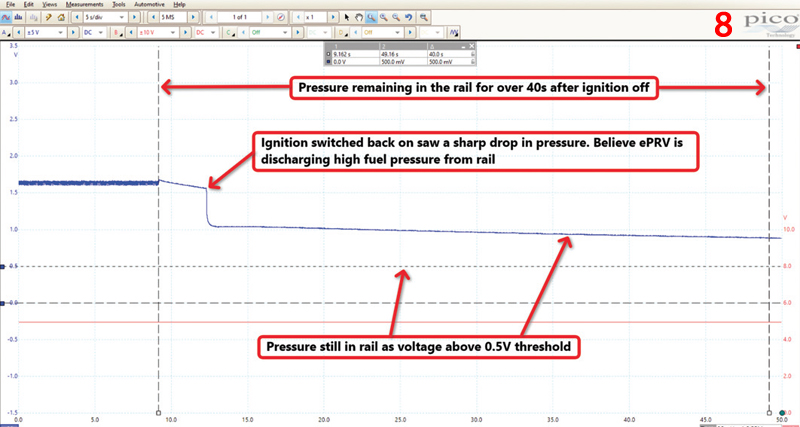 When the ignition is switched back on, it is clear that the discharge valve relieves the rail pressure. What it fails to do is let all the pressure drop, which is how I know it is fixed. The voltage, as you can see in Fig. 8, doesn’t drop to the 0.5V threshold for the sensor, indicating that there is still some fuel pressure inside the rail.