CVW was present at Truck World 2019 to see Bridgestone’s commercial tyre and mobility solutions come to life. Held at the Millbrook Proving Ground, the company demonstrated how its products are evolving to meet the demands of an increasingly challenging industry.

Upon arrival at Millbrook, we were driven from one side of the site to another, allowing us to fully comprehend the magnitude of the facility; Bridgestone certainly meant business by demonstrating there.

First up was a video of Bridgestone’s CEO, Paolo Ferrari, who made two points overtly clear: that the company’s business is transforming, and that the world of commercial vehicle tyre and mobility solutions is changing faster than ever before, leading to what Paolo described as a “rapid evolution” of the company.

Leading the day’s presentations was Greg Ward, Bridgestone’s Commercial Sales Director for the UK and Ireland, who wanted to assure fleet owners that the company’s priority was these fleets. Greg insisted that the focus was on delivering “maximum convenience, sustainability and efficiency” to fleet owners, and that the overarching aims of the company were to lower the total cost of ownership (TCO), streamline operations and maximise productivity. 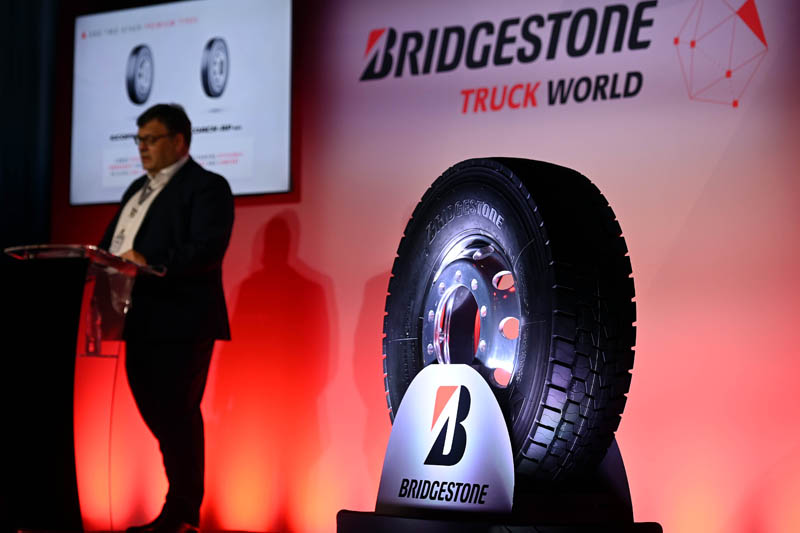 Following a larger insight into Bridgestone’s commercial vehicle tyre offering, Greg introduced the two highlights of what was to come; the Duravis R002 and the Ecopia H002. Greg labelled the former as an “important product that offers 45% added wear life, a reduced cost per-km of 15%, and optimised fuel efficiency”, amongst other things.

Millbrook seemed to be an apt venue for what was a showcase in the capabilities of commercial vehicle tyres. Greg insisted that the purpose of the demonstration at Millbrook was to be able to “prove the quality of our products, rather than to simply present in front of you”. From that, we went outside to one of the facility’s many testing tracks.

Here, we were met by Chris Buchanan, Bridgestone’s National Fleet Manager, who gave us an insight into the Ecopia H002. He spoke about how the tyre was the only one on the market with an A-A-A combination in steer, drive and trailer, and noted that the most significant difference between the tyre and its predecessor, the Ecopia H001, was the rolling resistance.

To prove this step up, we were shown a live demonstration; the coast down test. The test’s objective was to compare the rolling resistance of two identical vehicles with the same fuel load; the only differences being the drivers and the tyres. When compared with an old generation set of Bridgestone tyres, the Ecopia H002 was able to continue rolling when coasting for a far greater distance than its competitor; one of the drivers kindly pointed out that this distance was around 120 metres. Chris highlighted that because of this rolling resistance, these A-rated tyres were capable of saving fleet managers up to nearly £7,000 per year, per truck, based on an average of 200,000km travelled.

Up next was Neil Collison, Bridgestone’s National Fleet Executive, to discuss the swanky new Duravis R002. Neil took his opportunity to wax lyrical about the benefits of using the tyre, especially in comparison to the older generation R001, whereby it boasted an improved wear performance of 45%. 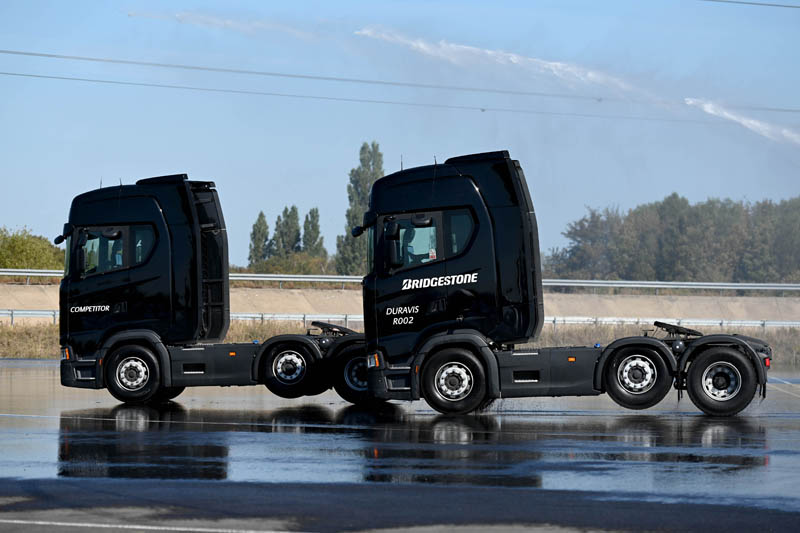 The Duravis demonstration saw two tests take place in what were rather wet conditions. The first sought to prove that the Duravis R002 had a higher lateral grip than the a competitor’s tyre. As the trucks ‘floored it’ round a tight bend, there was a noticeable difference; the vehicle with the competitor tyre lost traction approximately 10m before the Duravis. Although this was a particularly extreme test, it was necessary as a means of demonstrating the difference between the two tyres, as dry conditions and a normal bend would not have adequately displayed the disparity between the two tyres. Stepping out of the cab, one of the drivers informed the crowd that “Although the competitor tyre isn’t bad, the Duravis has improved on it”. Chris Buchanan expanded on this improvement, explaining: “The Duravis produces a substantially different fuel consumption compared to its predecessor. There simply wasn’t the technology two or three years ago to do what we’re doing.”

The final demonstration of the day saw the two trucks go head-to-head once again. However, this time, after turning into a straight at approximately 40mph and reaching the ‘finish line’, they would brake as hard as possible. This time, there was a difference that even an untrained eye could pick up. The tractor unit with the Duravis tyres was roughly two-three metres closer to the line than its equivalent. The driver’s final comments showed a clear preference for the new model: “There was a noticeable difference in the lack of slip on the truck – it stops a lot quicker.”