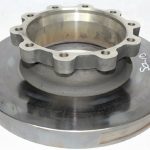 Would solid brake rotors be beneficial for your operation? Winnard’s Carl Jones is your guide.

The design of brake rotors has been evolving since their introduction, with the main objective being to
reduce the level of heat crazing and cracking that occurs. The latest commercial vehicle designs now separate the braking face from the mounting hub (floating, flat design). To help reduce this issue and whilst this has been relatively successful, it potentially creates some other operational issues. It also doesn’t help to reduce the cracking of earlier conventional designs. What’s the difference between ventilated and solid discs?

Ventilated discs are designed to run cooler than solid discs in normal operating conditions. Most modern trucks have ventilated brake discs but for some off-road and older models, solid discs or rotors are an option.

On some operations, solid disc brakes can prove the most economic choice. Solid brake discs do not increase brake fade nor operate at significantly higher temperatures. They incorporate more metal which helps to stabilise the temperature variations and minimise the likelihood of the disc becoming warped by thermal extremes.

Unlike ventilated discs which can develop hot spots, there is less variation in temperature across a solid disc, so it is ideal for applications where repeated harsh braking cannot be avoided – in off-road construction and quarry work, for example. Solid discs typically cost about 30% more than ventilated discs, but life-cycles can be four times longer. How do the two compare in tests?

To corroborate feedback from operators that its solid discs delivered similar braking performance to ventilated ones with less heat crazing or cracking, Winnard undertook direct comparison tests conducted at an independent UK facility using the same test protocols as laid out in the ECE R90 certification procedure. Overall temperatures were very similar. However, the vented rotor failed at cycle seven, with one large crack; the solid rotor completed 15 cycles without major cracks. This is an impressive result as this test is the toughest possible. Furthermore, the central heat crazing  seen on the solid rotor was not too severe and Winnard believes this rotor could have continued the test and possibly completed another 15 cycles but dynamometer time would not allow. Pad wear tests – After cycle seven, the level of wear in the solid brake rotor is 6.5% less than in the vented rotor, and brake pad wear is 21% less.

If a customer has specific operational issues, where the brake rotor is subjected to high operating temperatures, which result in accelerated/premature heat crazing and cracking, then we believe the best solution is to fit a solid version and use a quality brake pad such as our Stage 2 IB703 material.

0 0 0 0
Previous : LCV Fleet Owners Could Drive Down Whole Life Costs By Investing In EV
Next : Making The Cut