Plymouth-based Tecalemit Garage Equipment is celebrating its 100th birthday in 2022. Here, the national garage equipment distributor discusses the long history behind its success.

The epic journey began at No. 10, Little Portland Street, London. Through an amalgamation of the Thecia company of Switzerland and Alemite company of America, the name Thecalemite was established. Originally supplying specialist grease-dispensing equipment, the company expanded rapidly as the demands for automotive greasing equipment grew at a pace. In the UK, the operating organisation suggested that the name Thecalamite was changed to Tecalemit and the rest, as they say, is history.

It is interesting to note that Alf Thompson, the company’s very first salesman, bought and ran his own car when he started, at his own expense, because the company could not afford to do so. That car, a Citroën, ran over 200,000 miles, and later, an Austin 12, which he bought secondhand, covered 240,000 miles.

The very first original equipment order that the company received was in 1924 from the Sunbeam Motor Company for hexagonal nipples and grease guns, which were standard equipment on the Sunbeam 14/40 cars.

By 1927, Tecalemit had supplied lubricating equipment for the Supermarine Napier S3 Aircraft, which won the Schneider Trophy outright. Electric clocks (six volts) for vehicles, made in Switzerland for Tecalemit’s French operation, were also imported and sold in the UK. 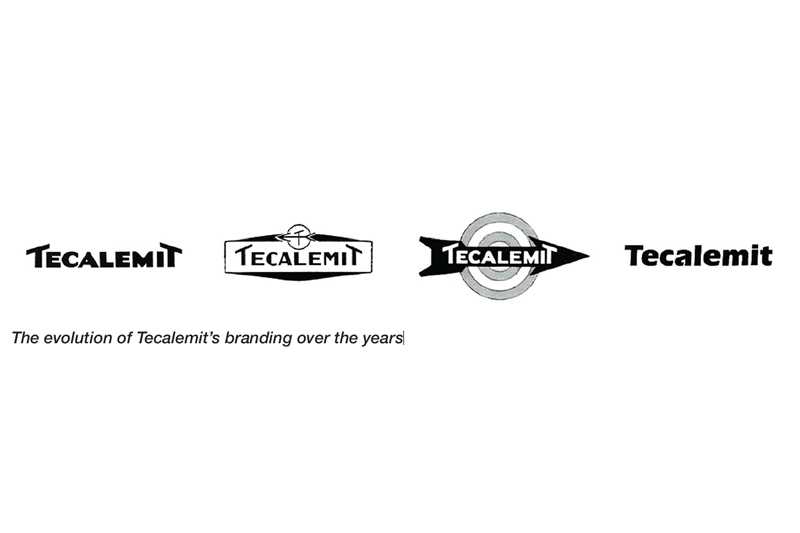 Machinery used in 51 different industries had been equipped with a Tecalemit lubrication system and the company’s name appeared on Army, Navy and Air Ministry contractors lists. Due to expansion in business, the factory moved from Little Portland Street to Mitre House, Scrubbs Lane, Willesden.

In 1929, Sir Henry Seagrave, in his Golden Arrow car, broke the land speed record at 231 miles per hour. His car was equipped with Tecalemit equipment.

Tecalemit was now well established as a major automotive equipment supplier and, in 1930, the company hit on the idea of regular servicing for vehicles and invented the Tecalemit Service Station. The idea proved a winner and, within a very short space of time, there were more than 3,000 service stations based on the original Tecalemit idea.

To cope with increased expansion, a new factory was found with more room. Situated on the Great West Road of Brentwood, it saw Tecalemit on the move again.

Products listed in the company’s catalogue at this time included an electric brake tester. This saw the Tecalemit name associated with brake performance testing long before the concept of the MOT test was introduced.

Today, the Tecalemit DE9700 series of commercial vehicle brake testers carry out hundreds of thousands of brake safety tests to MOT standards across the UK.

During 1934, the company started marketing on a hire basis the Adersol/Pneugrippa tyre treatment machines. These were hired out to many garages, motor race tracks, and the Metropolitan Police. This machine cuts slots across the treads of tyres, and the system certainly improved tyre to road adhesion considerably. Tecalemit’s association with the commercial vehicle tyre continues today with its range of professional HGV tyre changing, wheel balancing, and alignment systems.

The range of Tecalemit HGV tyre changers are available with four jaw or six jaw clamping mechanisms, together with a wireless remote control option for even easier operator use. During 1938, Tecalemit took over the marketing of all garage equipment manufactured by Laycock Engineering Company, Sheffield, and this arrangement strengthened Tecalemit’s range of vehicle lifting equipment. Today, commercial vehicle lifting applications are covered by Tecalemit’s range of specialist lifts including heavy duty mobile columns and parallelogram lifts.

In July 1947, site works for a new Plymouth factory was started. By 1948, the new factory at Plymouth was officially opened by the Lord Mayor of Plymouth. Production of guns started on 14th June 1948.

In this period, the T.K.S Aircraft De-Icing System was being fitted by Vickers, De Haviland, Short, Miles, Bristol, Hanley Page, Avril, and Percival for the de-icing of wings, fins, and air screws. 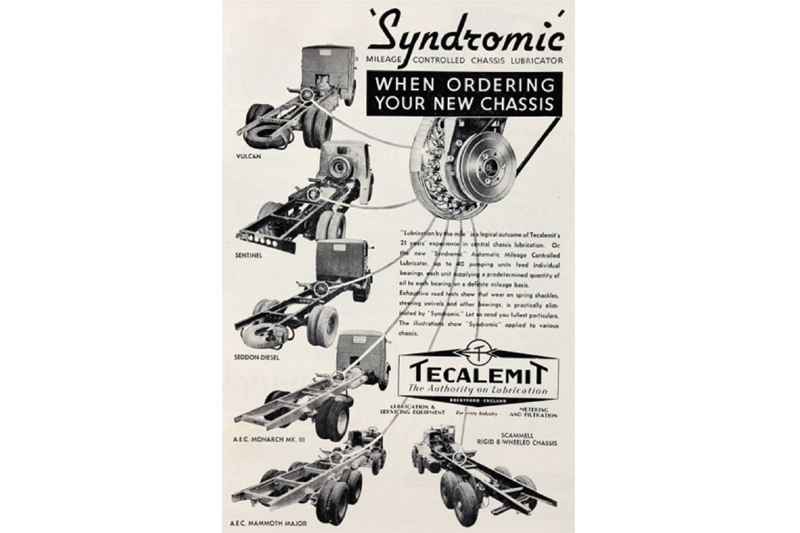 By November 1950, Tecalemit was promoting its new Syndromatic commercial vehicle automatic chassis lubrication system. Advertisements from the period depicted the unit being fitted to popular HGV chassis, such as, Vulcan, Sentinel, Seddon-diesel, A.E.C, and Scammell.

The Tecalemit Factory site at the Plymouth Marsh Mills roundabout was, with the exception of HM Dockyard, the largest employer of labour in the district. Its introduction made a big contribution towards the rehabilitation and economy of this famous West Country city, which suffered so much during the Second World War.

Today, the roundabout at March Mills is still referred to as the Tecalemit Roundabout by many who live in the Plymouth district.

The company of today

In 1998, Tecalemit Garage Equipment Ltd moved to their current premises in the Plympton district of Plymouth. This created the Tecalemit of today, which is widely known by HGV garage equipment distributors and workshops throughout the UK.

Tecalemit Garage Equipment is a fully-fledged member of the Garage Equipment Association and is an elected Council Member. The systems at its head office in Plymouth are fully ISO9001:2008 compliant.