VARTA takes CVW through some key milestones in battery technology and details the company’s 130-year history.

VARTA batteries are installed in new commercial vehicles by most vehicle manufacturers, and are trusted by drivers around the world to keep them moving. This worldwide trust is based on a powerful VARTA brand history that goes back more than 130 years.

It was in 1887, when Adolph Müller founded the first battery company in Germany. At that time, he had recognized the great market potential for rechargeable accumulators and thus laid the foundation for the future VARTA. In 1893, these batteries powered the first electric cars in Germany. As more and more drivers wanted to venture out on the road at night, VARTA was making the very first batteries for exterior car lighting.

From 1914 onwards, VARTA lead-acid batteries became increasingly popular as a means of starting car engines quickly and reliably. As the brand subsequently expanded worldwide, the product range also expanded to include the dry cell battery. Even at this early stage, the VARTA battery range was one of the most comprehensive on the market. The number of cars worldwide climbed past the three million mark, and the need for reliable and powerful batteries was increasing just as rapidly. VARTA continued to be one of the market leaders throughout Europe.

In 1935 the forerunner of today’s forklift truck, initially called an “electric car with lifting bars”, came onto the market. From day one, they were factory-equipped with VARTA batteries. In addition, the company offered the first batteries in standard case sizes. They fit in every car and made replacement quick, easy, and inexpensive. The first assembly line for automotive batteries went into operation, making the production of batteries faster and cheaper. The savings were benefitting customers in the form of lower cost batteries. In 1955, in the early stage of mass production, the VARTA plant for portable batteries in Ellwangen, Germany developed a paper-lined battery with a double-laminated separator between the plates. The success of the product is reflected in the fact that 23 countries adopted the patent for it.

The change from six-volt to 12-volt batteries in automobiles was a major shift that was made to meet the growing energy needs in vehicle models of the 1960s. In addition, a crucial component of the batteries was renewed: from now on, the separators were no longer made of wood, but of plastic, which made the products much more robust. As well as this, all cell connectors were now installed inside the casing, as opposed to externally connected. In 1965, VARTA started production of dry starter batteries in Germany. In addition, the previously used hard rubber cases of starter batteries were replaced by simple plastic boxes. This made them lighter and easier to transport. 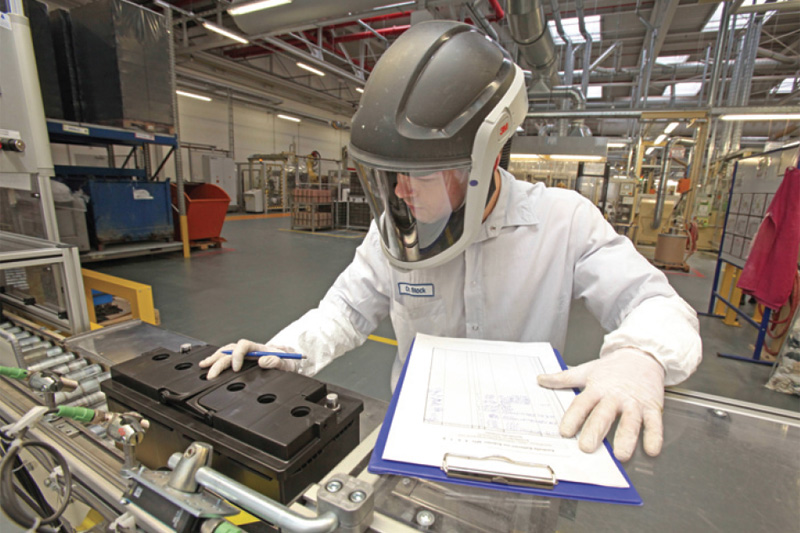 Post-1970, many innovations in battery technology took place. The first leak-proof car battery was introduced, the VARTA Super Dry, underpinning the company’s reputation as a manufacturer of reliable products. The first vibration and cycle-resistant starter batteries were developed, specifically to meet the considerable demands of construction machinery and commercial vehicles. Moreover, the first ever maintenance-free starter batteries – based on selenium technology – were launched. They had a low self-discharge, consumed little water, and generally reduced costs. VARTA then introduced a new type of truck battery, in which the grid was made of a calcium alloy, to the market. By 1986, nearly all batteries were maintenance free.

VARTA silver technology for automotive batteries was launched in Europe in 1995 and was quickly adopted by leading vehicle manufacturers.VARTA’s dynamic silver battery is now the ideal partner for high-performance vehicles with extensive equipment – for a long service life, freedom from maintenance and unsurpassed performance.

In 2003, a new automotive battery technology center opened in Hanover, Germany, bringing together some of the industry’s most skilled designers and engineers. In the same year, vehicle manufacturers awarded the company as the very first supplier of AGM (Absorbent Glass Mat technology) batteries for luxury cars. VARTA AGM batteries are tip-proof and require no maintenance or topping up. 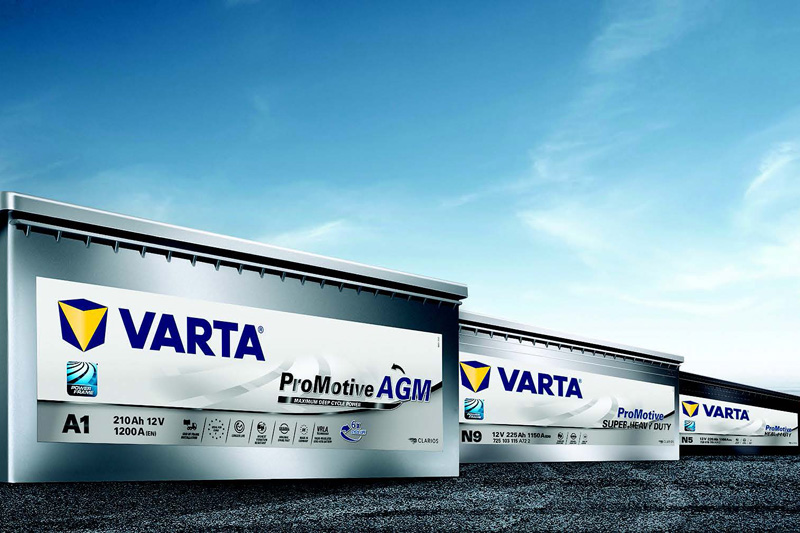 Silver technology for truck batteries entered the market and immediately caught on. VARTA Promotive Silver was the perfect power source for high-performance commercial vehicles from luxury coaches to the very latest truck models. The completely maintenance-free product offered longer life and exceptional performance. The premium flooded battery series, the VARTA Dynamic Trio, was launched in 2006. The Silver, Blue and Black model variants ensured that the demands of a car at any age could be accommodated.

Shortly after that, the company became a leading supplier of batteries for vehicles with start-stop systems and for hybrid and electric cars thanks to its new technology; AGM and EFB (Enhanced Flooded Batteries). Launched in 2008, the PowerFrame technology – the patented, pioneering grid technology was one of VARTA’s greatest achievements. It ensures optimum energy flow, unbeatable performance, and uncompromising reliability, whatever the battery application. Today, every VARTA battery still has the PowerFrame grid inside.

Car manufacturers continue to rely on proven VARTA battery solutions for start-stop. By the beginning of 2009, 80% of new vehicles with start-stop technology were factory equipped with a VARTA battery. The company continued to expand its production capacity in Europe to meet the increased demand generated by the VARTA Start-Stop battery range.

Past informing the present

A major milestone in commercial vehicle battery technology took place in 2014, VARTA introduced the very first EFB for Commercial Vehicles, with features such as mixing elements to ensure electrolyte didn’t stratify, and enhanced fixations to help with vibration resistance, particularly as many truck batteries were now being fitted at the end of frame, thus having to deal with more vibration. With three times the cycle life of a traditional flooded battery, the EFB for commercial vehicles was a game changer. It could power electrical consumers on board a truck during overnight stays, and also deal with short start-then-stop-again type journeys that a bus might experience in city traffic.

A further innovation in the commercial vehicle technology range was in 2019, when VARTA added the Truck AGM to the Promotive portfolio, the first Original Equipment accredited AGM for CVs. A whole new assembly line was opened at VARTA’s Hanover plant to produce this battery technology. Five out of the six big commercial vehicle manufacturers fit VARTA AGM as new to their latest trucks. This complimented the EFB, Super Heavy Duty and Heavy Duty range already in the portfolio, providing coverage for nearly all types of construction, agricultural and commercial vehicles with over 40 part numbers available. 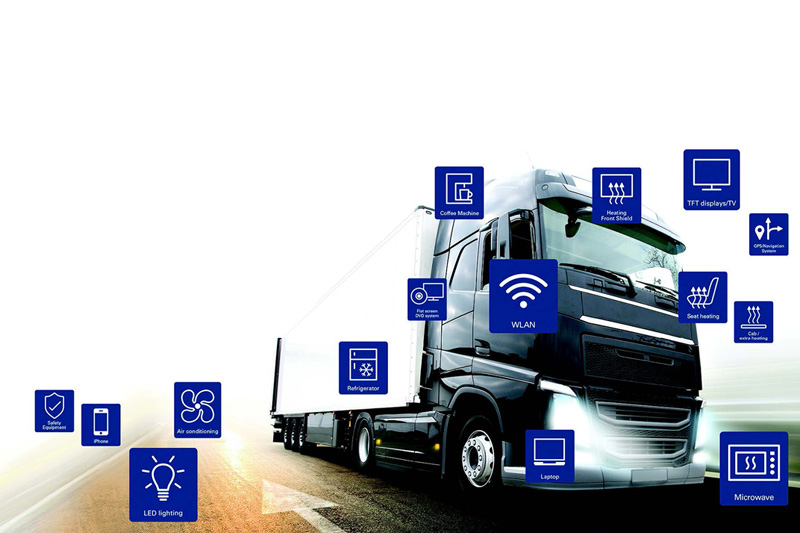 In 2020, VARTA added additional battery service platforms to their offering, with the VARTA Truck Portal and VARTA Fleet Program introduced. The VARTA Truck Portal includes a Battery Finder so fleet managers can accurately identify the correct type of technology for their vehicles, as well as a Total Cost of Ownership calculator so they can analyse the cost savings of fitting the correct technology first time vs. potential downtimes. The VARTA Fleet Program gives fleet managers the opportunity for a direct communication with the battery experts at VARTA to support them with decision making; which batteries would best suit their fleet’s requirements. By introducing these additional platforms, VARTA has the full service offering needed for commercial vehicle batteries.

Today, VARTA products will be found in millions of cars, commercial vehicles, motorcycles and leisure applications. The VARTA engineers put experience, knowhow and precision into every single VARTA battery. VARTA batteries are characterised by long life, less corrosion and vibration resistance, which is why it’s the most trusted battery brand throughout Europe.