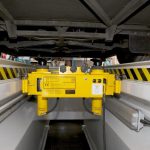  Safe use of lifts and pits relies on quality of design and regular inspection. Majorlift has been manufacturing pit jacks and beams for over 25 years. Here, Marketing Manager Mike Selby looks at workshop health & safety.

A jack holding a heavy vehicle in place over the heads of staff has to offer the very highest standards of safety – it’s not surprising that despite the efficiency gains some operators are wary of using pit jacks. Jacks are robust pieces of workshop kit. In the interests of safety, however, they need periodic checks. Majorlift recommends an annual safety check and a full service after three years operation.

Manoeuvring heavy gearboxes and transmissions is difficult, time consuming and potentially hazardous. The Majorlift solution is a range of drive-line adaptor plates for transmission jacks that significantly reduce the time to disconnect, remove and then reposition transmissions, allowing technicians to work swiftly and safely.

Inspection pits started life many years ago as just a hole in the workshop floor, and despite the fact that it made working under vehicles much easier, it was a pretty grotty place to work. Very often it was normal practice to sweep the floor and brush all the rubbish into the pit, perhaps then every few weeks the pit itself would be cleaned out (not very hygienic and by todays health and safety standards).

Gradually over the years things improved with permanent lights being added, before the addition of facilities such as air supply and waste oil disposal. Now almost all pits have a cover over them, or at least a guard rail to prevent accidents. In some modern workshops the pits are interconnected, allowing technicians to move safely from pit to pit without the need to come to the surface. Mike believes that one of the most advanced innovations was the introduction of the steel bath type pit, an advantage of which is that it is not effected by water ingress, which can be an issue in low lying areas.

The main enemy of hydraulic rams is rust; so it’s important to check that no water or condensation is getting into the jack – even though Majorlift rams undergo the rust- resisting treatment for added protection, components still need inspection.

Seals on the ram can perish over time, allowing water ingress and condensation. Jacks with air-operated pumps can also suffer from condensation getting into the compressed air-line, so check these are dry.

Equipment manufacturers have also moved with the times, developing first the pit jack and then pit transmission jacks, which are manually operated and air driven in various forms, offering a range of lifting adaptors making the area a safe and more pleasant place to work Mike says that another very useful tool developed by this company is the double extension top beam, which fits over the ram heads and enables servicing and testing to be carried out on light vans.