Ever since Kane Group adopted Continental’s tyre pressure monitoring system, ContiPressureCheck, across its fleet of tipper trucks, the contractor and aggregate supplier has never looked back.

As a player in one of the most demanding sectors for commercial vehicles and equipment, the team reportedly needed a way to reduce its escalating tyre costs, whilst boosting reliability and overall safety. The implementation of ContiPressureCheck across its fleet has proven to be the perfect fix for the company’s challenging needs.

Operating across the South-East of England since 1983, knowledge, understanding and professionalism has seen Kane Group develop from a loose muck-away and aggregates business, into a multifaceted earthworks, construction, demolition and waste removal firm. Based in St Albans, Hertfordshire, the group incorporates five separate companies and holds a combined fleet totalling more than £7million.

Transport Manager, Jordan Kane, explained: “In the harsh, tough environments that our trucks are working in every day, it’s inevitable that the tyres are going to take a kicking. To meet the needs of our customers, we frequently drive off-road on tracks littered with sharp rocks with a heavy payload. This puts a huge strain on the performance of the tyre that, without careful management, can rapidly develop an issue. In the worst-case scenario, that could leave a vehicle stranded, a customer disappointed and require us to fit a costly replacement.”

Prior to fitting Continental’s ContiPressureCheck, Kane Group reportedly struggled to maximise the working life of its tyres. Damage was reportedly common and tyres were being removed from service prematurely.

Jordan admitted: “Tyres, or more specifically dealing with tyre failures, is an expensive cost to the business and it’s an outgoing that traditionally has been hard to control. In this line of work, it’s very easy to run an under-pressure tyre, but ContiPressureCheck has undoubtedly helped to remedy this issue.”

The ContiPressureCheck digital tyre monitoring system offers drivers precise, real-time status information about the condition of a vehicle’s tyres. Through the continuous monitoring of internal air pressure and temperature via sensors, the system will warn the driver of changes before the situation becomes critical. Adaptable for the needs and requirements of most commercial fleets, the system can be effectively utilised both on-and-off road and can be efficiently scaled dependant on demand. 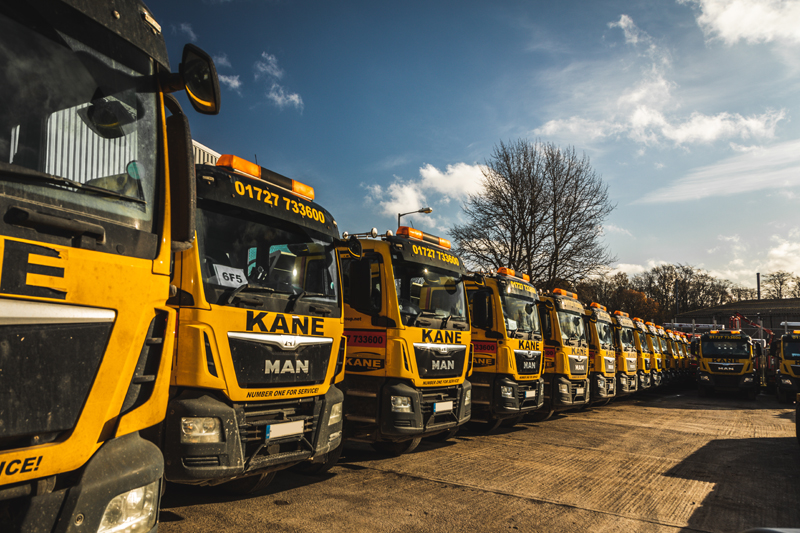 Jordan said: “When we discovered ContiPressureCheck, we were really impressed with both its capability and potential to deliver a real benefit to our business. It was clear to see that once we began implementing it on our trucks, we were able to reduce the number of tyre failures. We do still get punctures now and again, but when this happens, they are typically repairable, where previously the tyre was more likely to be written off altogether. Put simply, ContiPressureCheck has saved us a lot of time, a lot of grief and a lot of money. It’s certainly paid for itself very quickly in savings and it’s meant that we can offer an even more reliable service to our customers, which is fantastic.”

Following an initial trial, Kane Group’s relationship with Continental has grown, with the company now utilising ContiPressureCheck on more than 30 vehicles. “The service we receive from Continental is second to none,” Jordan recounted. “I’d love to say that they go above and beyond to help us out, but they don’t need to, as they’ve always got everything under control.”

The company was introduced to the system by Ian Jackson, Digital Solutions and Technical Systems Manager at Continental Tyres. Ian explained: “We’re always on hand to support our clients throughout the ContiPressureCheck ownership experience. I was pleased to guide the team through the product and help them find a solution to fit their needs. Kane Group has a truly knowledgeable in-house service and maintenance division, so they were able to fit the product to the fleet themselves. We’re delighted that the system has helped them to not only increase the longevity of their tyres but also allowed them to reap the benefits on aspects such as safety too.”

Safety is said to be crucial in the Kane Group’s operations, and Jordan is keen to highlight that the mitigation of risk is as important to the firm as cost-saving. He commented: “We have a duty not only to our staff, but to our customers and other road users that our trucks are in a safe, roadworthy condition at all times. Roadside breakdowns are always dealt with quickly and safely, but it is, of course, much safer for a truck not to be in that position. ContiPressureCheck means our drivers can act before it’s too late, either allowing them to identify a potential problem before their shift even starts or informing them early enough that they can find a safe place to stop if already en route.”

Thanks to ContiPressureCheck, Kane Group has transformed its approach to tyre management, keeping its trucks out on the roads for longer whilst also bringing safety and service benefits too.

Jordan concluded: “The ContiPressureCheck system remains, in our opinion at least, the best commercial TPMS on the market today. We’re delighted at the results and we can’t see that changing any time soon.”