According to a new World Health Organization (WHO) survey, more than 90% of all people worldwide suffer from poor air quality, whether they live in cities or rural areas.

Furthermore, the WHO warns that allergies are a serious health hazard that must be taken seriously. Europe-wide, some 60 million people are affected by allergies. The figure for Germany alone is 20 to 30 million citizens, and the trend is rising.

In commercial vehicles as well, allergic reactions due to pollen, bacteria and mould are on the increase among susceptible professional drivers.

To ensure that affected drivers can breathe freely at their workplace, filtration specialist MANN+HUMMEL has introduced the FreciousPlus cabin air filter, which is now available for commercial vehicles under its MANN-FILTER product brand.

The FreciousPlus binds allergy triggering substances, so-called allergens, and prevents bacteria and mould from reaching the driver through the ventilation system. In the independent automotive aftermarket, the cabin air filter is available in the customary OE quality for 2.4 million trucks in Europe, including, for example, the MANN-FILTER FP 32 001 for the Mercedes-Benz Actros and the FP 4795 for most MAN commercial vehicles. The MANN-FILTER FP 50 001, for example, is available for buses featuring Spheros REVO roof air conditioning systems.

Contaminated air in the vehicle interior represents a high risk for professional drivers. Not only allergic reactions, but also tiredness and impaired concentration, which increases the risk of accidents. 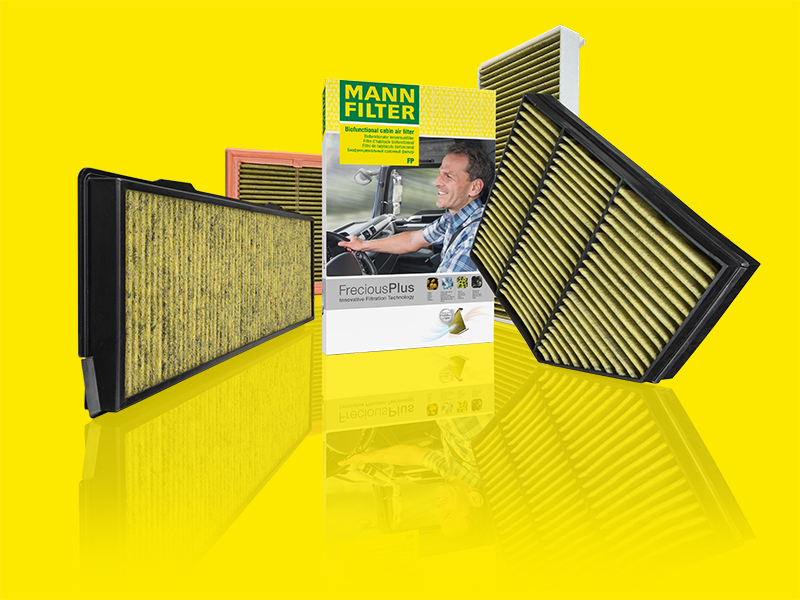 The FreciousPlus cabin air filter from MANN-FILTER has been designed to improve air quality thanks to three different layers. In addition to coarse particles such as dust and tire abrasion, its particle filter layer eliminates harmful particulate matter with aerodynamic diameters of under 2.5 micrometers (PM2.5).

These tiny particles are approximately 70 times smaller than the width of a human hair and can penetrate deep into the lungs.

The second layer contains activated carbon, which is derived from coconut shell. This almost completely adsorbs unpleasant odours and harmful gases such as nitrogen oxide, sulfur dioxide and ozone from the airflow.

The third layer, a bio-functional special coating, has both an anti-allergenic and anti-microbial effect. Drivers are, therefore, protected against allergens, bacteria and mould in the air conditioning system.

The anti-allergenic function also contains a new filter layer through a naturally-sourced polyphenol coating. Polyphenols occur naturally in many plants such as green tea, pomegranate and citrus fruits, and are able to bind allergens, rendering them harmless.

The MANN-FILTER FreciousPlus also looks different to other cabin air filters. It can be recognised by the yellow colouring of the polyphenol coating.