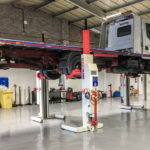 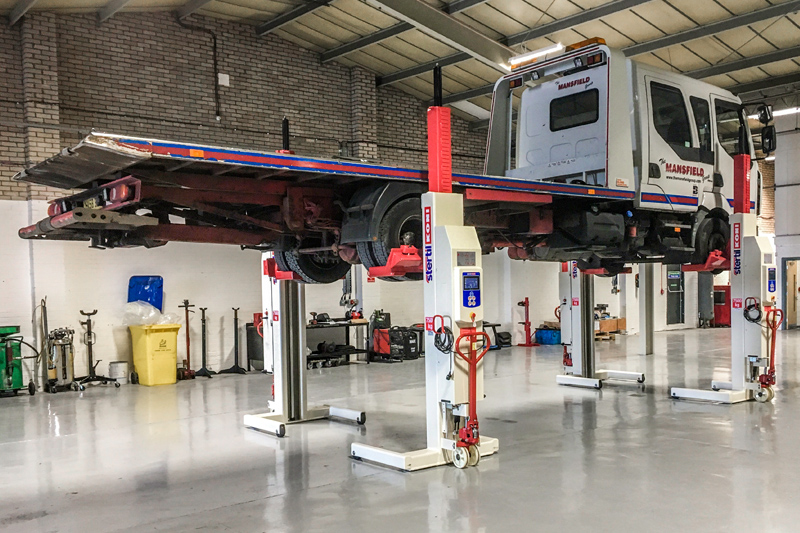 CVW delves into some of Stertil Koni’s recent success stories, to better understand what the company’s mobile, wireless column lifts can offer to workshops.

Longmarsh is a family-run company, established in 1956 in Wellingborough, which now provides various vehicle solutions including rental, sales and maintenance, complemented by an MOT station. Today, the business operates from four sites in the East Midlands and now provides a huge variety of vehicles for rental.

The company opted for the latest Stertil Koni mobile, wireless column lifts, type ST1075FWA, to support its operations. Importantly, the lifts were supplied complete with adjustable forks to safely and effectively accommodate the many different tyre sizes fitted to vehicles in the Longmarsh fleet.

Positioning of the wireless columns is flexible, enabling them to be used in any configuration around a vehicle. Each of the four mobile columns provides a lifting capacity of 7.5 tonnes, which means that the combined capacity of the set reaches up to 30 tonnes. Also, each column incorporates Stertil Koni’s eBright Smart Control System, which allows workshop staff to operate the columns individually, in pairs or in any other configuration.

Incorporating wireless mesh network connectivity and full-colour touch screen consoles, the eBright Smart Control System has been designed and developed to simplify operation by providing maximum visual information about every lifting operation – all at the fingertips of the workshop engineers. For added safety and performance, the system also shows how many columns in the set are being used, plus the battery status of each column.

Long-life deep cycle batteries power the lifts for at least a week on average, asserts Stertil Koni, before recharging is necessary. Also, battery life is prolonged due to the fact that, unlike a screw-lift, power is only used to raise the vehicle. Less time is therefore spent recharging the lift, which is carried out via a 230V single phase supply. With no cables on the workshop floor, the risk of tripping is removed, and with no wired power supply, the system can be used safely inside or outdoors.

The absence of power and communication cables also means that set- up time is drastically reduced. Significantly, the lift’s synchronisation system ensures a smooth lifting and lowering cycle, even in the event of extremely uneven load distribution.

To cater for engineers of all heights, the ST1075FWA provides a maximum lifting height of 1.85m which is reached in 75 seconds. Stertil believes this is an important feature of the new lifts, which support workshop activities throughout a six-day working week and can be used to safely raise and lower up to 10 vehicles a day.

The columns incorporate Stertil’s maintenance-free, synthetic runner wheel system, which is self-lubricating, and the system is covered by a lifetime guarantee.

“The Stertil Koni mobile lifts are easy to operate and have given us the flexibility we were looking for,” says Terry Mayne, Manager of the Longmarsh depot in Wellingborough. “We like the fact that the lifts are wireless, so there’s no restriction on where we position them and there’s no danger of tripping over trailing cables. It was also helpful that Stertil Koni were able to supply the lifts from stock.”

In another recent example of the support Stertil Koni can offer its customers, the Mansfield Group decided to upgrade to a set of wireless mobile column lifts to support workshop operations at its new depot in Liverpool.

The Mansfield Group was established in 1978 as a repairer of farming equipment, cars and commercial vehicles. Today, the business specialises in vehicle recovery, rescue, storage and repair, providing services to all major motoring organisations, police forces, councils and government agencies.

At the new Liverpool depot, the set of Stertil Koni wireless mobile column lifts, also type ST1075FWA, is used to simplify and speed up all servicing, repair and maintenance operations. Once again, the lifting capacity of 7.5 tonnes each provides plenty of support for the vehicles, whilst the ebright Smart Control System allows workshop staff to the flexibility to operate the columns individually, in pairs or in any other configuration.

“We opted for the Stertil Koni wireless mobile column lifts as space is at a premium at this site,” says Steve Rothwell, Network Manager at The Mansfield Group. “Also, we are able to use them anywhere in the workshop. We were extremely pleased with our previous cabled lifts, but the wireless versions have given us extra freedom in the way we use them. For instance, our workshop engineers can use a single column lift to easily and safely tackle a whole range of everyday jobs, such as wheel removals.

“Another advantage was a saving in installation costs compared with the cabled versions. This is a new depot and, if we had opted for the cabled versions, significant costs would have been incurred to upgrade the wiring to 32A, 3phase. By contrast, the new Stertil Koni wireless models simply plug into any standard 13A socket.”