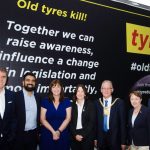 The tyred campaign is calling for the banning of the use of tyres older than ten years on buses, coaches and minibuses.

A campaign has been launched calling for a ban on the use of tyres older than ten years on buses, coaches and minibuses following a fatal accident which resulted in three people losing their lives and left many more seriously injured.

The tyred campaign was launched by Frances Molloy, mother of Michael Molloy who tragically lost his life at the age of 18 after the coach he was on, crashed when travelling back from a music festival.

The cause of the crash was a tyre nearly 20 years old, prompting the Coroner who oversaw the inquest to write to the Government appealing for legislation to be changed to prevent more deaths. However, instead of changing the law, the Department of Transport simply amended guidelines which only recommend, but crucially do not require, that tyres over 10 years should not be fitted.

Campaigners from tyred say that a legal requirement is needed to prevent more families suffering the loss of a loved one. Although tyres on so-called Passenger Service Vehicles (PSVs) do undergo inspections, it is very difficult to spot the type of internal deterioration that caused the tyre to fail.

Due to the way that data is captured, it is impossible to estimate how many people are killed each year as a result of old tyres on PSVs such as buses, coaches and minibuses. However, the last set of published figures show that a staggering 200 people were injured every week and 90 people were killed every month on PSVs. Tyres are the single largest contributing factor when casualities arise from vehicle failings on UK roads and in 2015 there were over 38,000 tyre-related callouts on our motorways and A-roads.

Speaking about the launch, Frances said:

“I am determined that no other families should suffer the pain that we have. I couldn’t believe that there are no legal requirements on the age of tyres for PSVs and I’m sure most parents would be concerned to know that their child could be travelling on a bus with dangerously old tyres fitted.

“The tyred website has information about how you can check the age of tyres yourself and we will be encouraging anyone who has concerns to follow this up and ensure operators are using safe tyres.

“Tyres are a critical safety component and the only thing keeping a vehicle safe on the road. Regular tyre maintenance is essential for safety of both drivers and passengers of PSV’s. Unfortunately, as 27% of drivers state that they do not maintain or even check the safety of their tyres, it is clear that we have a big problem.”

“The Government have not done enough to end the dangers on our roads from old tyres. New unenforceable guidance does not save lives – changing the law does. The safety of passengers on buses and coaches is too important to continue to fail to act. Coroners have twice drawn this issue to the attention of the Secretary of State for Transport and the change in the law which is needed is simple and easily enforced. Yet the law remains the same. Labour is committed to banning unsafe old tyres that kill. Before there are more disasters that kill people, the Government should do the same.”

0 0 0 0
Previous : Choosing the Right Battery for the Job
Next : Prioritise Pressure and Flow in Compressed Air Systems