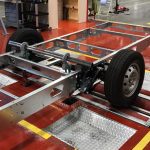 Garage Equipment specialist, GEMCO Sales & Service says it is no stranger to fulfilling unusual requests from customers. Here, the company talks about a specific problem it solved for component manufacturer Al-Ko Kober Ltd.

 GEMCO is in the business of selling and installing garage equipment, lifts, roller brake testers, wheel alignment systems and their associated items, but in today’s market, the company says this is no longer enough to compete. When it comes to automated test facilities, MOT stations and fitting of pits, a huge amount of time has to be put in to allow for site visits, CAD design, ground investigation reports, floor level tests and so on. This in itself is dictated by so many outside influences such as corporate identity, health & safety requirements, customer preferences, ground conditions and space availability. For a single garage owner it can take up valuable time, effort and money as well as months to get the job right.

An example of a problem solved for a customer, is the installation recently carried out at Warwickshire-based light commercial chassis converter Al-Ko Kober Ltd. The company first approached GEMCO in 2015 looking for a roller brake tester, which could also simulate a completed, fully loaded vehicle. This was to ensure that the brake force was indicative of a motor home full of furniture rather than of a skeletal chassis.

Using bespoke parts from partner Sherpa Autodiagnostik, GEMCO carried out the work, leaving Al-Ko with a finished product, which is still working without issue today. Fast forward to March 2017, when a meeting took place between Paddy Quinn, Head of Manufacturing at Al-Ko Kober and James Atkins, Area Sales Manager for GEMCO to discuss another of these systems going into a symmetrical lane at Al-Ko’s Southam base. Paddy was said to be pleased with how the current system has worked to his company’s needs, the system has always done what was asked of it and has never failed, meaning no shutdown in his lane. Small changes were made to optimise efficiency, including that of a problem with chassis’ with secondary or tag axles. Once pulled down by the load simulator this would gound out their tyres. This means extra pressure was needed from the pistons in order to effectively apply the same force. The company also noted that generally all control boxes were put as far away as possible to please the eye and not intrude into the bay. However, this meant that potentially in an emergency an operative would have to cross two live lanes to shut the system down.

With this information in mind James came up with the idea of sections of concrete cut from the ground before and after each roller to avoid the tyre grounding out and post mounted emergency stops by the driver’s door.

Mike Ward, Construction Manager for GEMCO then took this a step further and designed durbar plates to be stuck into the concrete allowing a seamless, aesthetically pleasing finish to the floor. Al-Ko now has two brake tester and load simulator setups running alongside each other with post mounted emergency stop in the lanes.