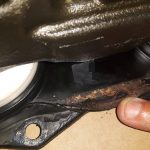 Fleet Parts Ltd is keen to highlight the potentially misunderstood differences between core that has been remanufactured to robust technical specifications and calipers that are in fact reconditioned or recycled yet are being marketed, or at the very least implied as, remanufactured.

 With quality and safety being at the forefront of the Fleet Parts philosophy, in recent years, the company has become increasingly concerned about the varying quality of commercial brake caliper components it has seen entering the supply chain in the UK. As a result, it has recently published a visual document illustrating a small number of the many examples it has become aware of.

In a genuinely remanufactured brake caliper, the remanufacturing process requires the replacement of all guide pins, bearings, bushes, bolts, gaskets, seals, as well as any other worn or damaged components. Many of the examples of so called ‘remanufactured’ calipers Fleet Parts has examined, have not had these key components replaced, but rather have included re-used or badly worn parts, liable to compromise the function of the caliper in future use, compromising safety and incurring potential downtime and additional service and repair expense. (See example in the image above.)

But more importantly, Fleet Parts believes that some of the examples it has investigated have caused concern that basic reliability and safety of transport for drivers and pedestrians could be compromised. The company has found that in some cases, worn out components are being reintroduced to brake systems that could contribute to accidents and safety issues if not detected at the point of brake caliper replacement.

The images below, show new bearings and shells, which Fleet Parts uses in the remanufacture of brake calipers, in contrast with the re-used, worn and corroded needle roller bearings and shell as used in one of the other calipers it tested.

Fleet Parts Director, Derek Rothwell comments: “We have inspected a wide range of brake calipers, stripping units down to individual parts and noting where these have been replaced with new and where old parts have been re-used. Our research has found that some of the new parts used are often inferior, being of the wrong material, grade, dimensions, hardness and surface finish. “Our findings have given evidence to our belief that there is an increase in the range of calipers and other brake components coming on to the market branded as ‘remanufactured, when in fact this is simply not the correct terminology and is potentially misleading for buyers.

“We hope that in bringing awareness to what a truly remanufactured caliper should include as standard, we can inform and educate customers to what they should expect and rightly deserve if they are being presented with components described as remanufactured.”