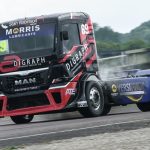 Win tickets to see the Finale of the British Truck Racing Championship with Morris Lubricants.

The keenly contested 2017 British Truck Racing Championship sees a clutch of drivers in contention for the title, including Morris Lubricants sponsored star Dave Jenkins. With only a few rounds to go there is everything to play for and will set up a thrilling finale at Brands Hatch.

You can be there to see Dave’s bid for title glory at Brands Hatch on November 5th thanks to Morris Lubricants who are offering two lucky readers the chance to win a pair of tickets for the final round of the BTRC.

The company has a reputation for producing high quality lubricants and the MLR programme provides the company with the perfect platform to promote and demonstrate that their oils and lubricants can cope with the highest demands of motorsport.

HOW DO YOU ENTER?

To be in with a chance of winning this great prize, simply answer the following question. The answer can be found elsewhere on this page. Two winners will then be chosen at random from the correct entries.

How many applicants did Morris Lubricants receive for their MLR program in 2017?

Send all answers to marketing@morris-lubricants.co.uk by 16/10/17 for a chance to win.

0 0 0 0
Previous : The Importance of Water Pumps for Engine Performance
Next : Braking Tradition