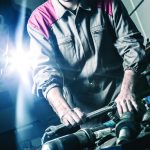 Winter lubrication is an essential part of the preventive maintenance schedule. Lucas Oil says it ticks the vital boxes.

Although many tractive units and trailers have on-board systems that feature automatic lubrication, winter servicing jobs remain an essential part of the seasonal workshop routine.

The true value of rust-inhibiting lubricants is often underestimated, according to Lucas Oil. They can prove to be the best tools in the toolbox because they have two key functions. They can release nuts and bolts but, when applied wisely as part of the winter maintenance programme, they can also play a more important role in preventative maintenance. Despite the use of appropriate greases, corrosion through age makes elderly trailers with drum brakes and modern models with disc brakes prone to brake seizure. Regular attention from anti-rust products is vital because they keep components moving.

From a wheel hub lubrication point of view, it’s essential to employ greases than can disperse water – and vital to use products that can resist ‘sling out’. This is caused by constant attack from spray, but well- intentioned drivers armed with power washers can be just as destructive.

Wheel hub care is a major vehicle safety issue that can raise concerns – but not necessarily because hub maintenance routines are inadequate. Greases have set standards for a reason and Lucas says those that fail to match the specifications should be avoided.

OE quality automotive greases are designed to meet specific performance requirements over extended maintenance intervals. Consequently, the standards adopted by the US National Lubricating Grease Institute (NLGI) are trusted and widely used by OE trailer manufacturers because they are rated among the highest standards in the world.

reness is not always enough. Some brake adjusters do not require grease at all. ‘Super slider’ greases remain stable under pressure and are ideal for kingpin and fifth wheel couplings. They may not be the kind of lubricant to choose for lubricating high speed wheel bearings, given the extreme temperatures involved.

Care must be taken to use greases that are product specific.

Cold temperatures also cause the lubricants inside steering columns to gain viscosity. A one-shot additive is an easy remedy. It can also resolve ‘hard spots’. Fuel monitoring systems are common amongst many fleets, but increasing numbers of engineers are finding that the use of additives in engine oils and fuels pays dividends, too.

Oil in the sump is at its most viscous after inactivity. Internal wear is most likely to be more intense – and more damaging – during a dry start. This is where more than 60% of engine damage occurs. Oil specifications only tell part of the story, particularly where long drain cycles are employed.

The quality of the additive package determines the degree of protection provided. Oil stabilisers are increasingly added to the winter maintenance programme because they fortify engine oils. This has the effect of increasing operational life and extending their ability to protect against wear.

Fuel additives are commonly used as part of MOT preparation schedules because they reduce emissions. Moreover, some of the additives used to prevent diesel waxing in extremely cold environments are also able to increase fuel efficiency. That’s because the manufacturer has included additives that remove tars and varnishes from injectors, upper cylinders and lift pumps.

When the winter is over, continued use of fuel and oil additives is a worthwhile investment. They help to maintain the fuel economy benefits and keep emissions at a manageable level over the long term.

0 0 0 0
Previous : Will 3D Printing Revolutionise the Parts Aftermarket?
Next : Remanufactured or Reconditioned?