The vehicle’s AC system operation relies on two factors, the flow of refrigerant throughout the AC loop and the refrigerant’s change of state. A key component which allows the AC system to work properly is the expansion control device. Expansion valves are commonly used within the aftermarket, and are usually installed at the evaporator inlet. Its main function is to convert liquid refrigerant into cold low-pressure gas and to regulate the flow of refrigerant through the vehicle’s AC system. The expansion valve meters refrigerant flow according to evaporator temperature, and the load and cooling demand of the AC system. Inside the valve, a moveable rod enables the valve to open and close a passage, allowing refrigerant to move inside the valve. It accurately meters the precise amount of refrigerant needed according to outside temperature and need for air conditioning.

As the expansion valve operates under high pressures and is temperature sensitive, improper working conditions, as well as impurities inside the loop, can cause its deregulation and malfunction. If the expansion valve is stuck open or clogged, the AC system won’t cool properly. A clogged valve leads to insufficient refrigerant, increasing the pressure in the system and causing the AC compressor to overheat. If the valve is stuck open, too much refrigerant is allowed to pass through the system and into the compressor. If the expansion valve fails, it can cause problems with the functionality and performance of the AC system – and if ignored, it can be expensive, with irreversible damages to other system components.

When suspecting malfunction of the expansion valve operation, it’s recommended to perform an extended system diagnosis. Troubleshooting the system operating pressures by means of pressure gauges may reveal the most common issues with the expansion valve. If a failure of the valve is concluded, the part should be replaced.

Symptoms of a failing expansion valve

3. Inconsistent air flow – Sometimes a bad expansion valve will provide an inconsistent performance in its ability to regulate the flow of refrigerant throughout the system. If this occurs, the air coming out of the vent may be too cold or too warm. The air will likely alternate back and forth between different temperatures at various times. If the air varies between cold and warm, the expansion valve should be inspected at once.

4. Excessive temperatures generated at some of the loop components – A faulty or blocked expansion device will cause the system to operate under improper pressures, thus generating excessive temperatures. The easiest way to diagnose these spots is the high-pressure side’s components; ducts from the compressor outlet to within and including the receiver dryer. Temperatures above 50°C will warn about potential blockages/malfunctions of the expansion valve. 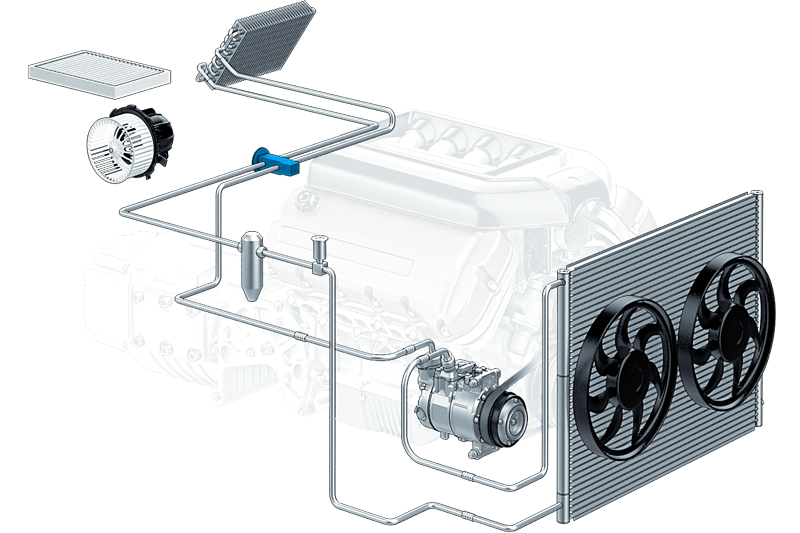 5. Improper system operating pressures – Too high or too low pressure gauge readings may be a sign of expansion valve malfunction. Normal gauge readings should be between two and three bar on the low side, and 14 to 24 bar on the high side.

0 0 0 0
Previous : Replacing the Intercooler
Next : Choosing the Right Engine Oil