With the obvious offenders regularly addressed through new initiatives, it is important to remember that reducing emissions is not as simple as reducing CO2 from engines. Juratek explains why tyres and brakes assume a greater significance.

The UK government is committed through legislation to improving UK air quality by reducing particulate emissions, including PM2.5, from road transport with net zero emissions being targeted by 2050. Initiatives like the ending of the sale of new passenger cars and vans with petrol and diesel engines by 2030 are important signposts of this intent.

Studies show that the major concentration of emissions occur in areas of high vehicle density and a built-up environment. Currently the bulk of emissions are from the vehicle exhaust, but as these are reduced through new technologies such as PHEV & BEV non-exhaust emissions from our roads, tyres and brakes assume a greater significance. Specifically, this is from the passenger cars and vans which populate our towns and cities across the nation.

In performing their function, friction brakes wear and, in so doing, contribute particulate matter to the environment; current estimates are that, annually, approximately 27,000 tonnes of PM2.5 and PM10 is generated by all forms of road transport in the UK, with brake wear contributing approximately 25% of this total.

This comes about due to a combination of the abrasion of the two braking surfaces rubbing together and the thermal decomposition of the friction material, in particular its phenolic resin binder which starts to degrade at temperatures of around 200°C. The braking “couple” comprises two elements, the friction material (brake pad or lining) and its mating surface (brake disc or drum). In Europe, the composition of the majority of brake pads are classified as either “low steel” or NAO (non-asbestos organic) – both families use a phenolic resin binder, with the low steel materials having a superior wear resistance at heavier duties and higher temperatures.

The brake disc is produced from grey cast iron with carbon contents around 3.2-3.8% together with alloying elements like copper and chromium to help promote strength and hardness. The disc brake, being open to the atmosphere, would be expected to emit more particulate matter into the atmosphere during operation than the drum brake which in effect is a “closed” system, the wear particles generated by braking being contained, to a large extent, within the drum. 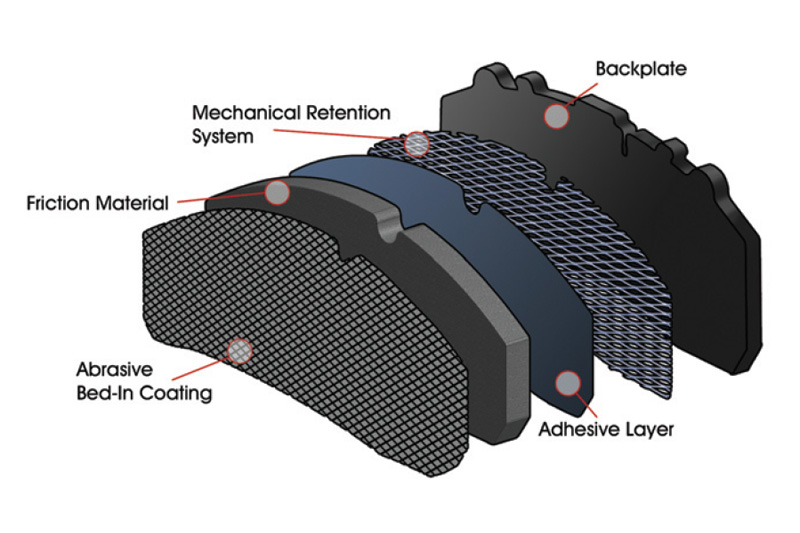 A considerable amount of research work has already been undertaken across the world to try to quantify the volume and size of particulate matter emitted by brakes under different braking cycles with different levels of energy loading and temperature, with the ultimate aim in the next few years of introducing some form of regulation aimed at restricting the amount of particulate matter they are allowed to emit; this work is not yet complete and hitherto has been focused almost entirely on light vehicle disc brakes.

Much remains to be done and agreed, not least the most appropriate “real world” braking cycle that will be used to measure the volume and size of the particulate matter emitted; of course, any emission legislation cannot be at the expense of braking safety which is covered by regulations R13H, R13, and R90.

From the work that has been done so far, the results are what might have been expected. Low steel materials are better (relatively lower in emissions) at higher duty and NAO materials lower at lower speeds and temperatures. One can imagine that the focus on emissions could lead to the use of more wear resisting friction couples and we already see limited application of carbonceramic brake discs on some models albeit at a significant on cost and more recently the introduction of brake discs with a super hard coating. Another approach is to partially enclose the brake and fit special filters to capture the bulk of particulate emissions. A combined approach is perhaps most likely.

Heavy vehicles are a rather different proposition. They are not frequent visitors to city centres. They fit engine brakes and retarders which help reduce the overall demand on their friction brakes, especially on downhill descents, and, of course, drum brakes have made something of a comeback on trailers and these would be expected to retain much of the product of wear within the drum.

As yet, there is no quantification of the amount of PM emitted by heavy vehicle axle brakes in the variety of roles that these vehicles undertake so a lot of work will need to be done to arrive at real world data under different conditions of operation to allow for the creation of appropriate test regimes and sensible legal rule making.