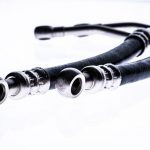 AJUSA discusses the importance of well maintained lubrication in turbochargers.

The use of turbochargers is increasingly widespread within the main engine manufacturers worldwide. Such is its current popularity that it is expected that more than 80% of engines will include a turbocharger over the coming years.

Although its use in diesel engines is widespread, it is not that common in petrol engines. However, in the last few years the presence of turbocharged petrol engines has become more and more common, due to new environmental regulations and improvements made in the technological implementations for this kind of engine. With the increasing number of vans on our roads, turbochargers are something CV workshops should certainly be aware of.

The turbocharger is the mechanism that allows the use of the kinetic energy from the exhaust gases by spinning a turbine wheel, which in turn moves a compressor wheel on the other side, both connected by a shaft. With this process the intake air is compressed, so the density of it is increased, and therefore the mass flow is higher during the intake stroke.

By introducing this air in the manifold the engine is supercharged, and as a consequence the combustion is more effective and more energetic, so that the engine’s displacement can be reduced while the power is kept or even increased.

The use of smaller and lighter engines entails less fuel consumption and thus, less harmful gas emissions to the environment.

However, the turbocharger is a device that works under very demanding conditions, such as very high revolutions per minute of its shaft, over 200,000 rpm, and very high temperatures on the components of the turbine, sometimes reaching 1,000°C. Because of this the turbocharger requires a perfect and continuous lubrication. A lack of lubrication, or poor condition of the oil, will often lead to the failure of the device. ■ The use of the proper oil and its substitution within the right range is important to assure the proper lubrication at all times. Follow manufacturer’s recommendations for the type of oil, and also for the filters replacement and oil change times.

■ Keep the right level of oil. There are risks for the lubrication of the turbocharger this is the same in the case of low level of oil as it is for high level of oil. Check periodically.

■ Ensure the oil pump and the ducts are in good condition, especially the oil feed pipe.

The oil feed pipe is the component responsible for introducing the oil in the turbine shaft, which means it is a critical part in turbocharger lubrication. AJUSA recommends that the following points are taken into account when changing the pipe:

■ Make sure the reference is the right one. AJUSA provides a turbocharger components catalogue and its website and Technical Assistance department are on hand to support customers. ■ Do not extract the oil feed pipe out of the protective bag until the moment of installation.

■ Use new washers and screws when applicable.

■ Always use brackets to absorb engine vibrations and prevent oil pipe failure due to fatigue.

■ Do not bend or excessively force the pipe during the installation, it may obstruct the oil flow.

■ Lubricate the housing of the shaft.

■ It is essential to take into account the torque of its terminals to avoid leaks.