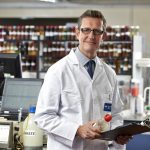 Using Cheaper Oils Might End Up Being A Costly Mistake

Fleet Managers who try to save cash by using cheaper lubricants might well end up shelling out more in the long run, according to Adrian Hill, Automotive Product Manager at Morris Lubricants.

Inferior lubricants affect fuel economy, meaning fleet operators will visit the pumps more often than those who use products recommended by the OEM. According to Adrian, cheaper products might not always live up to the claims they make on the barrel – and that could lead to problems with components, or even complete breakdowns. “Using the correct lubricants, at the correct drain intervals as prescribed by the OEM, will maximise the efficiency and the lifetime of the vehicle,” said Adrian. “People can be attracted by the proposition of saving a few pennies on a litre of oil because it looks a good deal, but the down side is that it might not provide the necessary fuel economy benefits and it might not offer the correct levels of protection.

“A lot of the cheaper gear oils claim the 75W-90 or 75W-80 viscosity classifications. But when they have been checked by the industry watchdog, Verification of Lubrication Specifications (VLS), they have been found to be substandard. They are not meeting the 75W claim, which means they are not as fluid at low temperatures as the specification claims they are.

“Fuel economy is mainly attributed to that cold-start period because that’s when the oil is at its thickest. If you’ve got a thick, gloopy oil, some of that energy generated by the engine is not getting to the wheels. It’s needed to churn through the thick oil.”

Adrian said that a sure-fire way to ensure that a lubricant is up to scratch is to check whether it carries an approval for a specific vehicle. Fleet managers should ask for proof from their lubricant supplier that the oil in the barrel matches up to what is claimed on the label.

Morris Lubricants is a British company that has been manufacturing lubricants in Shrewsbury since 1869. Over 140 years of development has seen the company grow to become one of Europe’s leading oil blenders and marketers with a reputation for quality and service.

Adrian added: “If you use the wrong products in transcontinental vehicles doing many miles, you can rack up a lot of wear and tear. In the medium-term, you start to see downtime and unreliability. If you’re going from Birmingham to Venice and you breakdown two-thirds of the way there, that’s expensive as you’ve got to repair and recover it. Also, cheaper products may invalidate a warranty claim.It’s short-term costs versus long-term gain.

“Anybody who thinks they are getting a really cheap deal on a lubricant, with lots of performance claims should ask for evidence. If they can prove it, great – but nine times out of 10, it’s not going to be a wise move in the long-term.”

Morris Lubricants has rebranded its OEM approved commercial vehicle oils under the new Versimax title, a name which combines the versatility and maximum quality on offer.