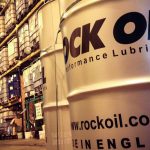 Rock Oil was established in 1928 by Fred Malone, the grandfather of the current Chairman, Charles Hewitt. The products are manufactured from the finest synthetic chemicals and oils; they claim to meet and surpass all relevant national and international standards. CVW finds out how this hasn’t always been the case, and how the business has been through a lot to get to where it is today.

Rock Oil ticked over nicely as a small locally based operation until World War II, when rationing of many raw materials meant the business had to take a back seat. Only after the war did business really take off, gradually building up custom and purchasing its first sign-written van in 1958. Tragically, in 1973, the premises burnt to the ground, and to make matters worse, it was uninsured. With blending being taken care of by another blender for a short time and with backs to the wall, the business slowly recovered.

Rock Oil entered the 1980s with a rebuilt plant and a return to inhouse blending. Now the company had a choice to make: either pile it high and sell cheap or gain some credibility. With serious technical products being developed, it was decided that Rock Oil become involved in racing and the motorcycle market. The need for motorcycle lubricants to be able to perform to the highest possible level was essential because of the high demand on components in motorcycle engines and gearboxes. Technical excellence, backed up by its involvement with racing, meant the Rock Oil name quickly became synonymous with top performing motorcycle products.

The 1990s saw a number of major changes for Rock Oil, including the move to its current purpose-built site near to Warrington. During this time two established lubricant firms were purchased and subsequently brought its business under the Rock Oil banner, these being A.E. Bennetts of Liverpool and Nickerson Lubricants of Halifax, both long standing independent lubricant blenders with their own specialised areas of business.

In 2014, Charles stepped down as Managing Director after 25 years in the position and took up a new role as Chairman. Greg Hewitt became Managing Director and took over the reins, with the company being the strongest it’s ever been. The company currently exports to over 70 countries worldwide and produces over 25 million litres annually. During 2017, it opened a new multimillion pound facility, which it’s claimed, houses one of the finest lubricant laboratories in the UK. This significant investment is crucial for maintaining growth and ensuring the business is able to deliver innovative products to its customers. Rock Oil’s support of motorsport and development of high performance lubricants is as crucial as ever and remains integral to the brand profile of the business. It has an ongoing partnership with the British Superbike series, which has been a massive success for the brand on both the domestic and international stage. 2018 also sees continued partnership with the FIM TrialGP World Championship. Along with the support of these two premier championships, the business also works directly with a multitude of motorsport teams and athletes.

Though perhaps best known for supporting motorcycle motorsport, Rock Oil also works with a number of four wheeled outfits. Teams such as Albatec Racing in Eurpopean Rallycross and Team Oliver Racing in the British Truck Racing Championship are both partners.