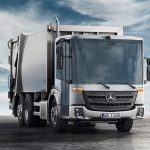 Direct Vision Standard – How do your Trucks Rate?

The Direct Vision Standard was created to improve the safety of vulnerable road users such as pedestrians, cyclists and motorcyclists. TfL research has identified HGV blind spots as a major contributory factor in fatal collisions involving cyclists and pedestrians. Over the past three years, HGVs were involved in 20% of pedestrian fatalities and over 70% of cyclist fatalities, despite HGVs only making up 4% of road miles in London.

How the DVS is rated

The star ratings in the Direct Vision Standard assesses and rates an HGV on how much a driver can see of the area which poses the greatest risk to vulnerable road users. This is based on driver visibility directly through their cab windows, as opposed to indirectly through cameras or mirrors.

TfL has developed a defined technical measurement to calculate the total volume of the weighted area of greatest risk that can be seen directly by the driver. The risk area has been identified through analysis of collision data and through consideration of how much of a person can, and needs to be seen to avoid collision.

The area is divided into zones, with those where the greatest risk of collision awarded a higher weighting – these are the areas where it is important for the driver to see because they can then take action to avoid a collision. Each vehicle is then awarded a score which in turn determines the star rating.

The DVS will rate HGVs from zero to five. The higher the star rating, the more a driver can see directly of the area of greatest risk. Five stars will represent the best – typically these will be the HGVs that allow the greatest direct visibility with features like low-entry and re-modelled cabs with low side windows in doors.

Only those vehicles rated three star and above, or which have comprehensive safety systems, will be able to operate in London from 2024. Incremental improvements to direct vision will result in a better rating. Star ratings will be published on a dedicated website http://safertrucks.org.uk/ where operators can check what star TfL has awarded to various models. TfL plans to start with Euro VI trucks, so operators who regularly deliver into London should check existing or new vehicle ratings.

TfL is also developing proposals for a Safety Permit Scheme, which is now out for consultation. By 2020, all HGVs over 12 tonnes would require a safety permit to enter or operate in London. HGVs with a DVS rating of one star and above would automatically be granted a permit. HGVs with zero star ratings would be granted a permit if they meet specific measures in a ‘safe system’.

This will build on best practice from existing, industry-recognised schemes. Measures could include:

■ Sensors and other indirect vision devices;
■ Audible or visual warning around the vehicle;
■ Physical protection to deflect vulnerable road users away from the vehicle;
■ Driver safety training.