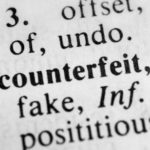 Editor’s Viewpoint: Real Or No Real?

CVW Editor James Moore looks at the dangers of counterfeit products in the October viewpoint.

Type in the term ‘counterfeit’ to any online search engine and you’ll be bombarded with stories warning of the dangers of counterfeit products. When doing so recently, I was unsurprised to find that make-up and cosmetics were the most common items revealed to be causing issues. Problems ranging from skin rashes to serious medical emergencies have been the result of such counterfeits.

Of course, with the number of goods sold in the cosmetics industry, and the exposure it gets on social media, it is of no surprise that these were the stories highlighted by the mainstream press. Dig a little deeper, however, and stories related to the automotive industry will start to appear. Whilst much of the content relates to passenger cars, the commercial vehicle sector is by no means exempt.

It’s an issue that hasn’t arisen overnight. But it is one that is beginning to gain more traction, particularly as the UK looks to broaden its trade horizons thanks to… well, Brexit. Entering new markets, for instance, many of which may not be subject to the same regulations as the EU, is likely to add to the problem. Both independent and fleet workshops will need to pay attention, as the potential problems that can occur from fitting counterfeit parts are a serious matter for anyone involved in the process.

The IAAF has recently voiced its support for a campaign by the Intellectual Property Office (IPO) to raise awareness of the risks posed by counterfeit products. The message from the IPO has been aimed at consumers, offering guidance on how to avoid buying fake parts, but is one that clearly extends to every link in the supply chain.

With the huge emphasis placed on compliance and safety in the commercial vehicle sector, the dangers are obvious. As Wendy Williamson, IAAF Chief Executive, has said: “Safety is of paramount importance in our sector…. counterfeit parts are putting motorists’ lives at risk.” Yet, as the IPO campaign, as well as many others, has highlighted, it is often very difficult to spot the difference between a ‘fake’ and genuine part.

So how does the industry put a stop to it? Looking ahead, the key will be to ensure full transparency throughout the supply chain. When it’s so difficult to be absolutely sure a part is genuine, it makes sense to be fully aware of who you are buying from, and communication between everyone from manufacturer to purchaser is essential. Working with respected distributors will help, particularly when many already have processes in place to guard against potential counterfeits.

It is a concern the Government has clearly picked up on and will be aiming to eliminate in future years. Unfortunately, a complete end to counterfeiting is unlikely – one only has to take a brief look at how other illegal enterprises continue to suceed to understand how difficult the job is. It will therefore be vital for workshops to do their bit, and continue to be vigilant when buying aftermarket components. If only genuine parts are bought, the market for fake goods, and therefore the profits for those involved, stop.

The reasons to increase awareness of counterfeit goods and their dangers are numerous. Safety is paramount of course, and should always be the primary factor. Just like how the dangers of wearing dubious cosmetics can cause lifelong health problems, using poorly manufactured goods can affect the health, longevity and safety of your vehicles.