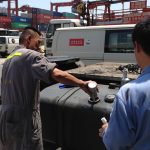 Are Fuel System Cleaners the Key to Improving Fuel Economy?

Fuel system cleaners could be the key to improving fuel economy and solving thousands of after-treatment issues, claims Cataclean. CVW finds out more.

Unexpected expense and unplanned downtime are always high on the list of fleet managers’ pet hates. It’s particularly frustrating when these issues are preventable, and when it comes to failed after-treatment systems, this is often the case. Diesel particulate filters (DPFs) and catalytic converters can cost thousands of pounds to replace. And yet, in many instances, this costly process and the downtime that comes with it are unnecessary. Research has shown that simply adding a fuel additive can reduce the risk of both issues by breaking down the harmful deposits that can clog DPFs and catalytic converters.

Given enough temperature and oxygen, the soot trapped in a DPF will burn off naturally in a process known as passive regeneration. In practice, this is not always possible, so vehicle manufacturers employ a variety of techniques to stimulate these conditions, in what is known as active regeneration.

“By reducing the effects of deposit build-up, cleaning additives can also be used to diagnose emissions faults. For example, if a catalytic converter is generating a fault code and an additive treatment clears the code in the first instance, then it’s likely that another part of the system is causing the catalytic converter to fail.”

Occasionally though, the vehicle still fails to burn off enough soot and the filter eventually clogs up. This prevents the engine from breathing properly, leading to reduced performance and increased fuel consumption. Left untreated, the DPF can clog to the point where it needs to be replaced. In some cases, repeated attempts to regenerate can even lead to engine failure as a result of oil dilution.

Excessive soot can also clog EGR valves and EGR coolers, increasing the production of nitrogen oxides (NOx). Likewise, a build-up of deposits on the catalytic converter can result in fouling, which prevents the device from functioning normally. This can lead to excessive hydrocarbon and carbon monoxide emissions. Both are potential MOT failures that can lead to costly repairs.

Fuel additives, such as Cataclean, can be used to address all these issues. The additive was designed with cleaning chemicals that, when burnt with engine fuel, pass vapours into the exhaust, breaking down carbon and soot deposits.

Cataclean can be used as a restorative solution to address known problems or to prepare the vehicle for an emissions test. Increasingly, though, it’s being seen as a service item. Adding a shot of cleaning additive to the fuel tank at regular intervals – for instance when it comes in for an AdBlue top-up – has been shown to reduce the long-term risks of component failure. By reducing the effects of deposit build- up, cleaning additives can also be used to diagnose emissions faults. For example, if a catalytic converter is generating a fault code and an additive treatment clears the code in the first instance, then it’s likely that another part of the system is causing the catalytic converter to fail. This can help to prevent major components such as catalytic converters being replaced unnecessarily.

There can be other benefits to this approach too. In tests conducted by Hong Kong International Terminals (HIT) container port, with the results validated at Liverpool John Moores University, it was found that regular use of Cataclean improved fuel consumption by 9.7% on vehicles working in demanding stop-start conditions. Emissions were also recorded and these were reduced across the fleet by an average of 33%, according to the company. In addition, other tests conducted by truck fleet operators have shown an improvement of 5 to 7% in normal highway use. Drivers have also reported improved performance and throttle response.

While there is a small upfront cost, the evidence suggests that this could be greatly outweighed by the benefits of greater fuel economy and reduced downtime. And that, surely, is something for fleet operators to smile about.

0 0 0 0
Previous : Are You Ready For the Apprenticeship Levy?
Next : The Importance of Oil Sampling