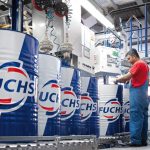 Go With The Flow

Oils in commercial vehicles are getting ever-thinner as the drive to reduce emissions and maximise fuel economy intensifies, according to FUCHS Lubricants.

Emission reductions and fuel economy are top of the agenda for companies running commercial vehicles, due to tightening margins and more stringent carbon dioxide emission laws. There are many changes manufacturers can make to help them improve fuel economy – and enhanced lubrication can play a major part.

In HGVs, much of the fuel energy is used to overcome friction. By selecting the right high-quality engine oil, this resistance can be reduced, leading to less fuel being used and ultimately reduced costs.

Andy Brown, UK Automotive Technical Manager at FUCHS Lubricants, says: “OEMs are using oils which have a lower viscosity, meaning the oils are thinner. This helps reduce both viscous drag within the engine and energy loss in areas where hydrodynamic lubrication occurs. This reduction in friction helps the engine become more efficient and use less fuel.

“Just a decade ago the standard product was a semi-synthetic 10W-40 engine oil, but now we’re seeing 5W-30s predominate the heavy duty market with even lower viscosity grades beckoning. We are already seeing this in the car market where 0W-16 oils have appeared in the UK for the first time.

“As a comparison, some of the engine oils at operating temperatures can be only twice as thick as water at room temperature. Our challenge at our R&D centres, therefore, is to keep working to improve our oils so that they are as efficient as possible, but also offer the required engine durability.” Andy believes that the majority of CV fleet operators and technicians are now aware of the importance of using the correct, approved products in vehicles – but continues to warn against the temptation of using a non-approved oil to save money.

He continued: “Oil is one of the most critical components in an engine – without it an engine just doesn’t work. It’s important to have the right oil and to understand how they are classified. All of the oils are different for a reason.

“We have seen instances where the wrong oil has been applied and, while that hasn’t directly caused the problem, it has invalidated the warranty. Fleet operators must cover themselves, there are no excuses anymore.”

The complexity of modern engines has meant that FUCHS’ automotive product range has expanded significantly, with work taking place alongside OEMs to create lubricants tailored to maximise performance of each engine.

“There are coated piston rings and polymer coated bearings, for example. The lubricants we produce have to be able to work with these new components.

“We work alongside some of the world’s major OEMs to produce products that exactly match their requirements. The High Temperature High Shear (HTHS) Viscosity test is run using oil heated to 150°C and under shear, which replicates what would happen in an engine.

“Testing in this way is timely and expensive but it gives the OEMs the confidence that our products stand up to scrutiny and will help them achieve their required fuel economy and meet their emission limits.”