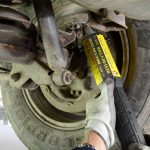 How to Remove Rusted or Corroded Brake Bleeder Nuts

Induction Innovations explains the process, using the Mini-Ductor 110V, in this step-by-step guide.

The Mini-Ductor 110V induction heating tool claims to improve workshop health & safety, save time and reduce costs by being more efficient at removing rusted, corroded parts than by using a naked flame or other methods.

For example, corroded brake bleeder nipples are said to be notoriously tricky to remove and it’s easy to accidentally break them off. Because of where the brake nipple is situated, using a torch is not really an option as the flame could melt the part and possibly the ball valve, with the risk of flammable brake fluid being released. Damage to the tyre, plastic trim and other ancillaries could well occur too.

The tool uses bendable coils which are said to provide good access to the part and fit around the nipple without touching it. The coil itself doesn’t get hot. Instead, the energy is created by an electromagnetic field between the two sides of the coil which creates a friction in the molecules of the metal which causes it to get hot.

There will be some residual heat passed on to the coil, but it doesn’t actually get hot itself. This means that wires and other components aside the area that is being heated do not get damaged.

Heat the part for around 15 seconds, which expands the nipple, then let it cool for around 20 seconds before attempting to remove it. This process may have to be repeated two/three times, but be patient and don’t be too heavy handed; a few minutes of using the tool will save hours of grief and extra cost if the nipple breaks.

Before beginning, it’s a good idea to clean the area and remove any corrosion with a wire brush. Ensure the selected coil is a good fit for the nipple, with the appropriate angle applied.