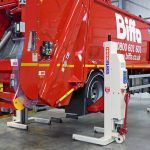 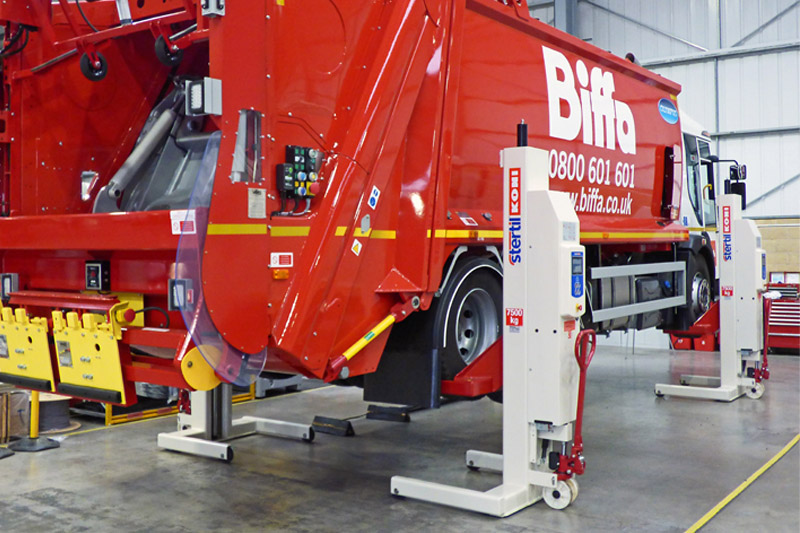 10 years ago, Stertil Koni’s introduction of wireless mobile column lifts to the UK heralded the transformation of vehicle workshops and their operating practices. In this article, Simon Laffoley, National Accounts Manager at Stertil Koni, outlines the development and recent advances of vehicle lifting technology.

Background
The popularity of Mobile Column Lifts (MCLs) in the vehicle workshop environment continues to rise – especially wireless versions. This is mainly due to the advances in communication technology over the past decade which has enabled individual lifting columns to easily connect with each other and to safely and securely transfer information between columns.

Before the arrival of wireless models, all standard MCLs were powered by 3-phase electric motors with the power and synchronisation being distributed to all columns within a set via plug-in style interconnecting cables. However, the cables and plugs on these lifts were seen as the ‘Achilles Heel’ of the MCL design, with frequent downtime caused by damage to these components, not to mention the health and safety implications of power cables trailing over workshop floors.

Operation
Early hydraulic models were powered by two 12V batteries in each column with inter-lift communication achieved initially via Bluetooth technology. This was superseded by a ZigBee system and now by a Wireless Mesh Network offering continuous active channel search and optimal connectivity. The power delivered by the batteries meant that the lifting and lowering speed of the 7.5 tonne ST1075FWA wireless lift model was the same as its 3-phase predecessor. Also, battery life was considerably extended due to the fact that full-power is only required on the lifting cycle, with gravity providing the power during the descent. This has been taken to another level by the Earthlift, a MCL which harnesses the gravitational energy stored in the raised vehicle, which is then used to recharge the batteries during the lowering cycle.

Features and benefits
The latest wireless MCLs are supported by full-colour, touch-screen control panels that give operators an intuitive information and operating system with which to control and manage the lifting system. The high-resolution screen displays the date and time, the number of connected columns, the battery charging status, the exact lifting height, buttons to select individual lifts, pairs of lifts and all lifts together, a selection button to control the speed of the lift/descent and numerous other functions.

Columns are connected together and operate as a set which can have up to 16 pairs of lifts, all fully synchronised together. Set-up procedure can only be completed by using a key fob that is touched against a sensor on the control box. Ensuring that only fully-trained technicians have access to the key fobs is an important but simple way for senior workshop management to prevent unauthorised use of the vehicle lifts.

The lack of interconnecting cables is beneficial in numerous ways:

An important safety feature of the most technologically advanced wireless MCLs is the provision of a
‘disconnection switch’ incorporated into the pallet-jack operating mechanism. This switch wirelessly disconnects the lifts from each other if a lift is raised fully on its pallet jack ready to be moved. Situations have already come to light where, for example, a set of six lifts were originally used to lift a 3-axle vehicle but the technician then only needed four lifts to lift up a 2axle vehicle in another part of the workshop.

However, because the lifts didn’t disconnect from each other when they were moved across the workshop, when the technician came to raise the four lifts, the two lifts still positioned around an axle on the first vehicle also raised, resulting in a seriously unsafe situation.

The potential risks were identified by Stertil Design Engineers as a serious health and safety issue and it was decided that their design for the wireless MCL would incorporate such a device as standard, even though it was not a requirement under current CE regulations.

Most electro-hydraulic MCLs also feature an independent mechanical interlocking system that activates as the lifting carriage rises up the main column. Some use a cut-out ladder section to activate a lock at the CE minimum increment of 100mm. However, latest designs use a ratchet locking system with spaces between the locks of just 35mm, nearly three times safer than the accepted standard. Another benefit of this feature is that the vehicle can be ‘parked’ on the locks when raised, preventing any accidental lowering of the vehicle (as bringing the vehicle down now involves three definite procedures: raising the lift off the locks, pulling the lock back and pressing the lower button).

Traditional electro-mechanical cabled lifts were considerably slower compared to today’s wireless MCLs. For example, it used to take approximately 3 to 4 minutes to raise a vehicle to a height of 1.8m. Nowadays, modern electro-hydraulic lifts can raise the vehicle to a similar height in just 75 seconds.

The increase in speed, though, was problematic for technicians who relied on the slow speed for alignment accuracy. A solution was developed where, if required, it was possible to slow the lowering speed by diverting the oil flow through a smaller correction valve, rather than the full speed descent valve. Any technician that has had to stand by an electro-mechanical MCL pushing in a hold-to-run lift button for 4 minutes will tell you that the new generation of hydraulic lifts is much quicker, safer and easier to use.

Optional extras available on the latest range of MCLs include:
■ Adjustable forks – no need for separate small-wheel adaptors. Standard on most manufacturers’ models
■ Fork-Lift pockets – to allow the easy movement of lifts from one site to another
■ LED lighting – to illuminate the undervehicle workspace
■ Various crossbeams – for lifting trailers and specialist vehicles

Whilst there have been tremendous advances in vehicle lifting technology throughout the past decade, product design and development of MCLs is still an ongoing process and will see even more innovative features introduced over the coming years.